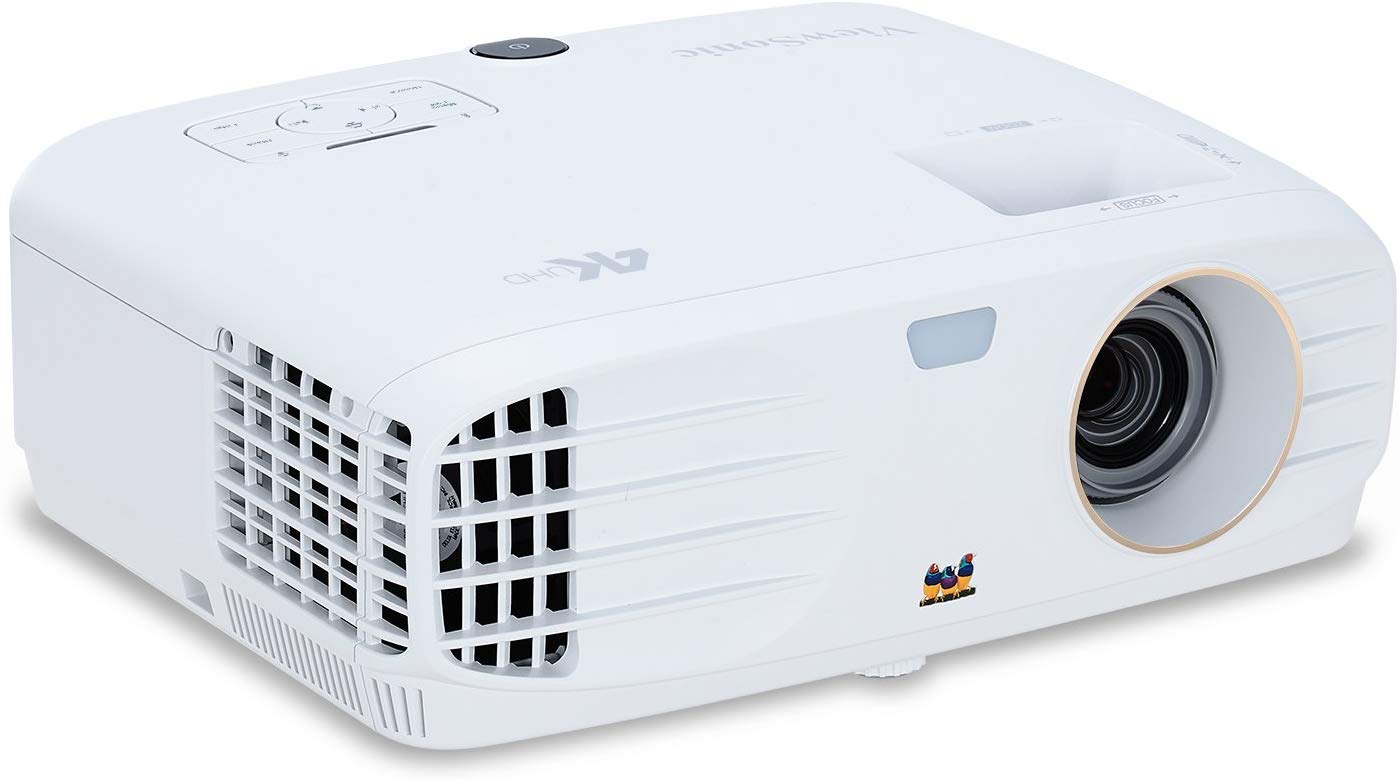 It is not unusual to see sometimes that a manufacturer puts out two remarkably similar projector models in a short period. Almost identical, to be precise, with just a couple of differences.

The same goes for ViewSonic PX747-4K, which is sort of a twin of a previous PX727-4K model. The only thing that separates these two is a different color wheel since one comes with an RGBW (PX747-4K) and the other one with an RGBRGB.

In reality, this means that the newer model can deliver more white brightness, while the older model can output more color brightness.

But, we’re here to talk about PX747-4K. And the best thing that separates this projector from the competition is its price.

However, don’t let the price fool you! It still delivers some pretty solid results and a picture quality that lives up to the 4K tag.

Read on to learn more about ViewSonic PX747-4K. By the end of this guide, you’ll know what this model can do, and does it fit your needs. 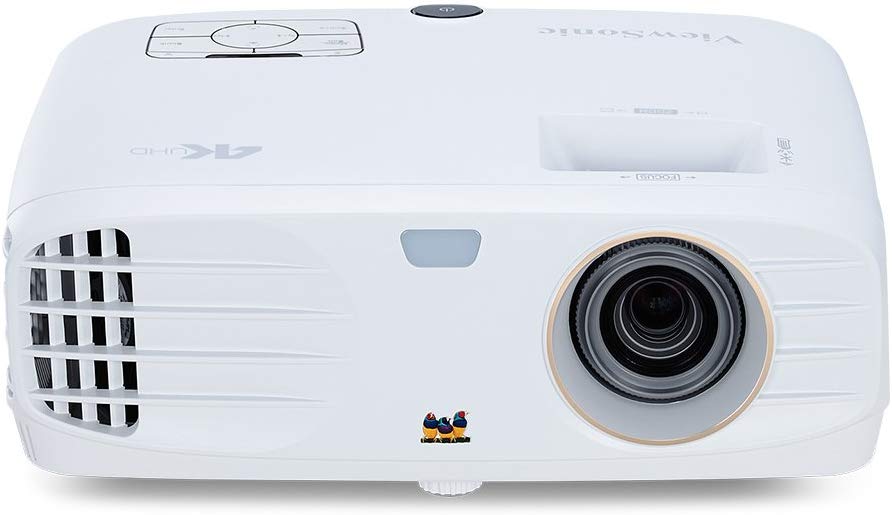 Like we’ve pointed out above, the PX747-4K and the PX727-4K are almost an identical pair of twins. At least when it comes to performance.

So, it’s not a surprise that, in terms of design, they are almost identical and virtually impossible to tell apart.

There’s nothing showy or spectacular when it comes to PX747-4K’s design. It is packed in a simple white plastic box.

But, don’t forget that this is a budget-friendly model (at least in the 4K market) so you shouldn’t expect anything more than that. Check out our best 4K projectors reviews.

Compact and Easy to Carry With You

The lens is placed to the right of the projector (when you’re facing it directly). And an exhaust with a fan is placed on the opposite side. 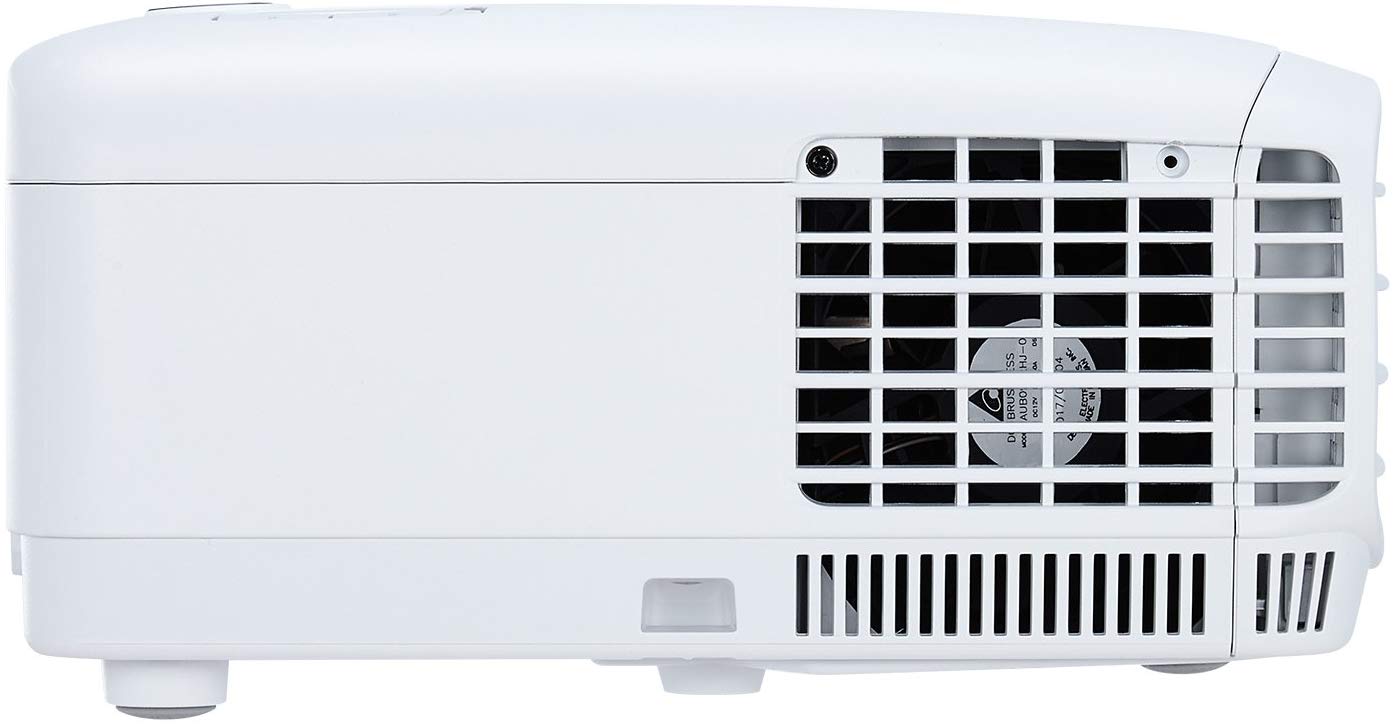 ​Some leakage might com​e out from the vent, but nothing to concern you. And, to be honest, nothing out of the ordinary for a low-cost projector.

All things considered, it is a well-designed model that has enough ventilation to keep the temperature at the optimum.

​An Infrared sensor is placed in the middle between the lens and the exhaust, which makes it easy to use the remote without any trouble.

On the top of the projector, above the lens, there are knobs that let you tinker with the zoom and focus. There are also some basic control buttons on top, like navigation, menu, and keystone adjustment. 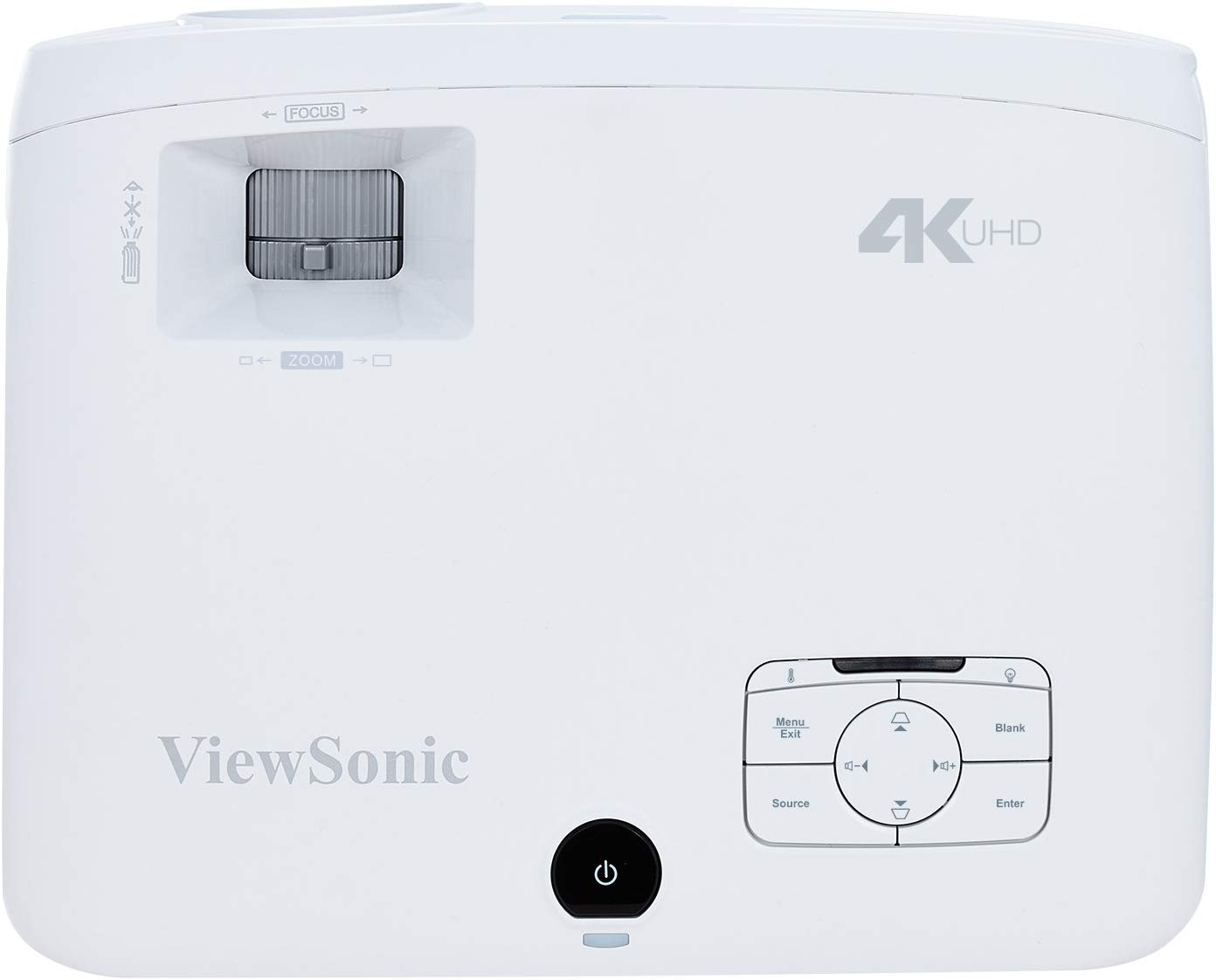 On top, there’s also a black power on/off switch, while there’s another Infrared sensor that lets you use the remote when the projector is ceiling mounted.

​It has a backlit remote, which is a lovely, functional piece with large, rubber buttons. They positioned the buttons ​with functionality and simplicity in mind and separated into groups.

​One thing that’s weird or unusual about the remote is the fact that there are two different power on and off buttons, which can be a bit redundant. 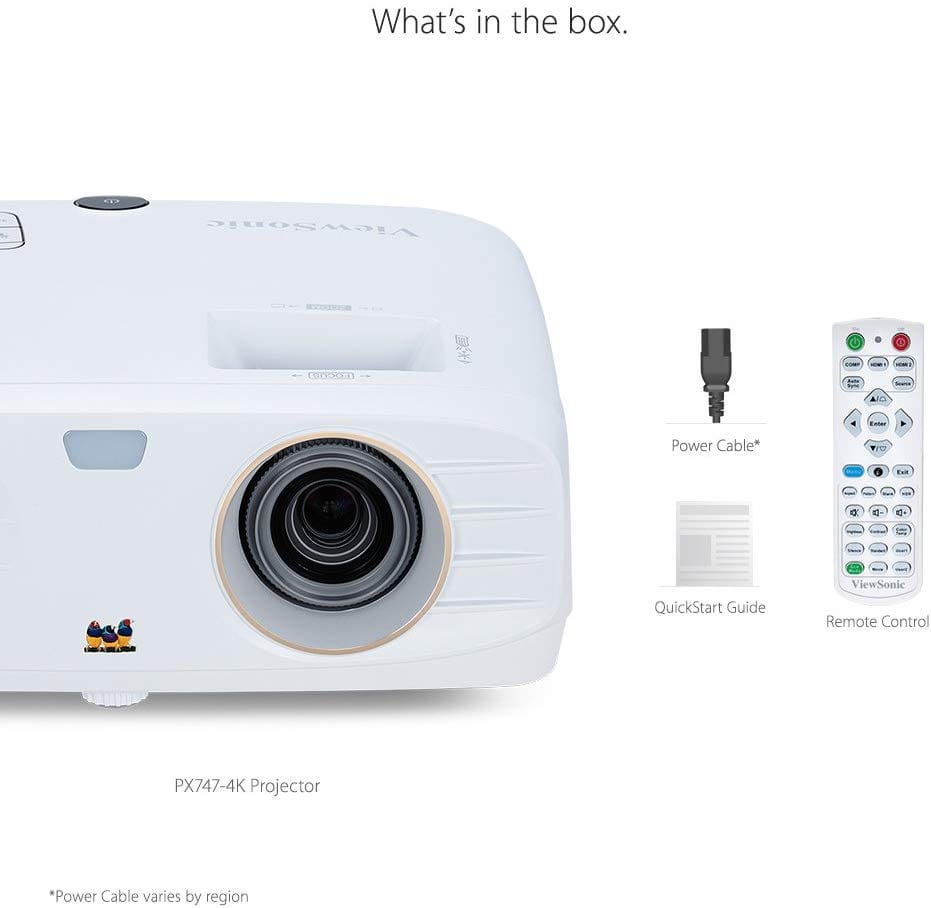 The first thing you’ll probably notice is the image sharpness this model displays. PX747-4K doesn’t skip a beat in terms of sharpness even when compared with native 4K projectors (which come at a much higher price, by the way). Read our article to find out more about low-cost 4K projectors.

​However, when it comes to black levels and contrast, those are areas where this projector doesn’t compare too well with pricier models. Which is all too common with low-level DLP projectors, where blacks tend to look more like dark greys.

Therefore, if you wish to have more natural and deep black levels, you might want to look for a more expensive model than this one.

When trying Full HD or SDR, this projector outputs a very clear and sharp image. There are no traces of noise or blurriness. And the colors are vibrant and vivid.

Watching such content with the PX747-4K is a delight, especially when you get past the so-so black levels and contrast. Those things probably won’t bother you too much unless you are a hardcore movie buff.

And if you’re looking for 3D support, unfortunately, you won’t find it here. Even though it’s a format that trails behind and will most likely stay that way, still it wouldn’t hurt to have it.

This projector doesn’t offer a wide color gamut. Which is a bit unfortunate, especially since it has a 4K and HDR capability. As a related product, check out Optoma UHD65 projector.

​However, it’s not that big of a surprise, considering the price. In the end, you’ll be able to get the proper color accuracy by playing around with calibration controls.

Movie Mode is Your Best Choice

The brightness is measured at 3500 ANSI lumens when using the Bright mode. There are two other modes: Standard and Movie. Standard mode measures at about 2,200 lumens while Movie mode goes at approximately 1,800 lumens. 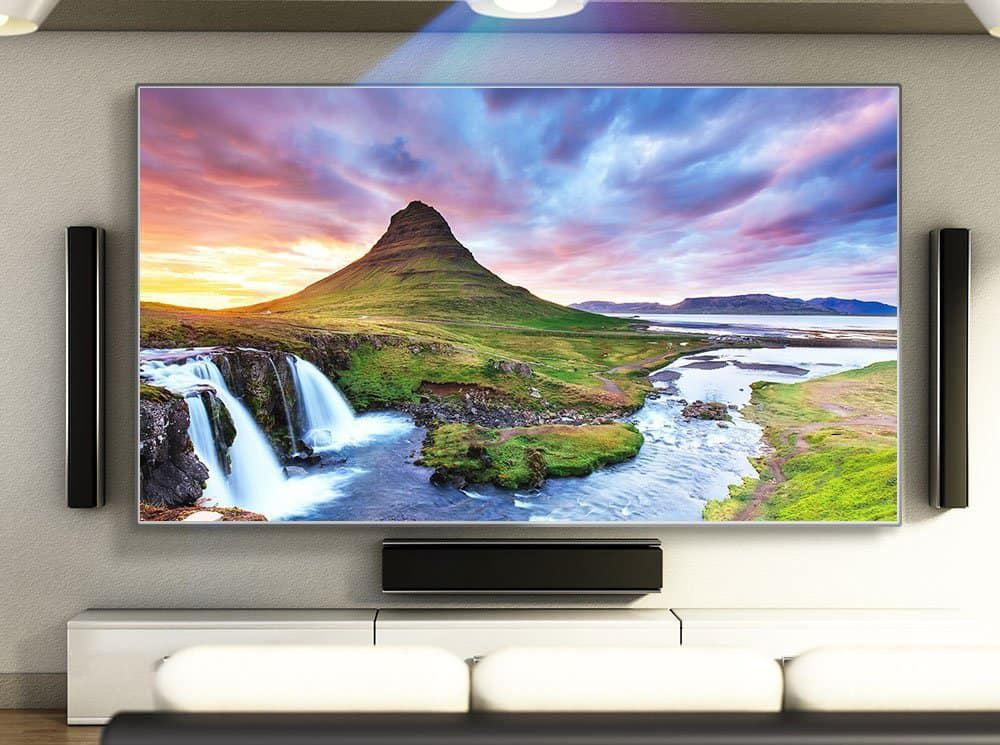 Both of these can provide excellent results, but without much ambient light.

And although the Bright mode can produce some excellent white brightness, you shouldn’t use it all that much because it tends to lower the color intensity and make them more uninspired.

All things considered, this mode won’t do much good for your viewing experience. You’ll probably get the best results with Movie mode, or at least if you perform the calibration the right way.

PX747-4K’s input lag is not something that will either disappoint you or thrill you. Depending on what you use it for, you will form your opinion.

With an input lag of 46ms, it is somewhere in between. If you are a professional, competitive gamer that needs a fast response without any glitches, you probably won’t feel too good about it.

Then again, if you plan to play just casually, PX747-4K can provide more than adequate results with most games. ​Therefore, if you do not take gaming too seriously, this model will be sufficient.

PX747-4K has a noise rating of 26dB, which is more than satisfactory. But it’s not all that simple.

For such results, you’ll have to engage the Silence mode. What this does it switches off the pixel-shifting technology and turns this projector into a 1080p one.

Most of the projectors that employ similar technology have the same noise levels, so it’s not at all unexpected. So, the noise is not too distracting, but it can bother some people.

The manufacturers claim that the lamp life is about 4,000 hours in Normal mode, and 15,000 in SuperEco. And although these numbers could be a little far fetched, having even similar values could be more than enough for such a cost.

One of this models’ best quality features is its portability. It’s designed to be easily carried around and set up at any place.

However, it’s not that simple. There aren’t all that many placement options with PX747-4K, seeing that it has a manual zoom of 1.20:1.

Naturally, the best place would be if it was ceiling-mounted, but of course, that’s not always an option.

With a 120% lens offset, you will be able to get the position the image about 10% above the lens center.

You can try and use the keystone correction, which can be found either mounted on the surface or on the remote control.

However, try to avoid using this option if you can, as it will lower the picture resolution. The best way to go about this is to mount the projector on a table, so it is level with the screen.

Another downside to the keystone correction is that it is only available vertically. Although not all models come with a horizontal correction option, it would still be nice to have.

The user menu at hand is as straightforward as they get. There are six different settings tabs.

In the first one, you can set up all the elementary picture settings like brightness, color temperature, sharpness or contrast. Within this tab, specific advanced options allow you to additionally optimize things like resolution, sharpness, skin tones or colors.

The second tab comes with display calibration options​, and the third one comes with installation settings for this model.

In the fourth, you can find the system setup. The fifth comes with the advanced options for things such as HDR or audio settings, while the sixth stores general info about the projector.

In terms of connectivity, PX747-4K doesn’t bring much new stuff to the table. All in all, it is pretty much similar to other similar models (like PX727-4K), so there aren’t many surprises there.

There are two HDMI inputs, one newer and one older version. HDMI 1 is a newer version 2.0, which supports HDCP 2.2, while HDMI 2 is version 1.4.

​Both are good to have. HDMI 1 will be able to handle 4K signal at 60fps, with HDR, while HDMI 2 will come in handy if you are not using newer gear that supports 2.0 or newer versions.

Also, there are two USB ports, type A and type B, and an RS-232 port and a 12V trigger. As you can see, the connections are pretty basic, but in the end, it’s probably all that you’ll ever need.

The PX747-4K comes with a built-in single 10W speaker. And as in any projector, it is safe to assume that it won’t deliver as much as a stereo sound system.

However, it yields some pretty decent results, as far as built-in speakers are concerned. The output is quite loud, and the bass is deep enough.

It works best when watching movies or TV shows and streaming videos in general. On the other hand, when it comes to gaming, it doesn’t provide such an immersive experience, like you would want it to.

When you take a look at the big picture, there’s no denying that PX747-4K can offer an enjoyable experience. Then again, that depends on what you expect from a projector, and what’s your budget situation.

But, if you’re looking for a budget model with 4K capability (something you couldn’t even imagine getting just a while back), with reliable performance and sharp output, then PX747-4K will get you there. Without a doubt.