Let’s assume you’re on a quest to find a new projector. You might not know a lot about regular projector specs, or what exactly you need or want from it, but one thing’s for sure.

You want a clear and crisp image, the best possible you can get for your budget. No matter what’s the intended use for it, you can’t go around it that a projector needs to be sharp.

Naturally, there are too many factors to be able to take them all into consideration. However, one number often pop up, and everyone’s talking about it when you discuss projectors, and it’s resolution.

We’ve compiled this guide to bring projector resolution closer to you, and to closely explain why it is so important if you want to have a quality presentation. Read on and learn more about it.

As a related topic, check out our projector maintenance guide.

Quick Navigation
What Is Resolution?
Color Resolution
Different Types of Resolution
SVGA
XGA
WXGA
FullHD
4K
Which Resolution is the Best for You?
In Conclusion

So, what exactly do we mean when we talk about projector resolution. First, it’s important to mention that your projector displays pictures and images with the use of pixels.

Pixels are just tiny dots that all together compose an image. The more pixels there are, the higher the resolution will be. Therefore, a resolution is usually described by showing PPI, which represents the number of pixels shown within one inch of an image.

Any screen, be it computer, TV, or a projector, is composed of thousands of these small units which change colors constantly, allowing you to display images, videos, or photos.

As we’ve stated above, the higher the number of pixels, the higher the resolution. But don’t let that number fool you as it is not the only thing that matters. For better image quality, pixel density is also crucial.

Lower resolution images not only have less clarity, but if the image is made large, like what you would see with a projector, the pixels become visible and make the picture even less appealing to look at.

A projector that has a higher resolution is able to deliver an image that has better detail. Resolution can be described in two different ways. The first way is with an acronym, including:

The other way would be using a number to display the vertical and horizontal pixels that the projector is capable of displaying. This is represented by the width and the height.

Some common examples include:

When you start asking around about projectors and their specifications, you’ll often run into the term “native resolution.” What does it mean?

To put it simply, it’s the resolution that gives the best results on a certain projector. The one that looks the best.

Bear in mind that native resolution is not the only one that a projector can output. You’ll be able to change the resolution (to a lower one) if that suits your needs.

So, if you find some resolution too much for you, you can always switch.

The higher the resolution projector you purchase, the more you should expect to pay. Usually, cheap projectors will have a lower resolution.

Because a lot of information is presented in HD, many professionals opt to purchase a projector with these capabilities. XGA projectors can be bought at a reasonable price.

They offer a resolution that is more than adequate for the majority of classroom settings.It is good to think about the material that you are going to present and then select your projector accordingly.

For example, if you are going to use Apple’s iMovie application, you should note that they require XGA as a minimum video resolution.

Another important feature, besides screen resolution, is color resolution. The only difference between the two is that the color resolution determines the number of colors that each pixel is capable of generating.

So, the more colors within a pixel, the more vivid and lifelike an image will be.

Back in the old days, when display technology was at its beginnings, when a device had a color resolution of 16 million colors pre pixels, it was considered a jack-pot. Nowadays, you can find models that are able to produce more than 60 billion colors per pixel. 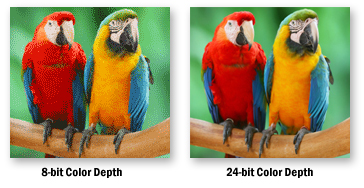 So, if you’ve ever wondered how come the images look more alive today, there’s your answer.

An easy way to think about these two concepts is that image resolution describes image detail as well as color detail. Just about every projector is going to offer similar color details. Where you will see a difference is in the image detail.

Different projectors offer different levels of image detail. Take the time to consider the material that you will present with your projector.

Then choose the right pixel resolution for your situation. To learn more about projector technology, please check out my guide on projector cleaning. 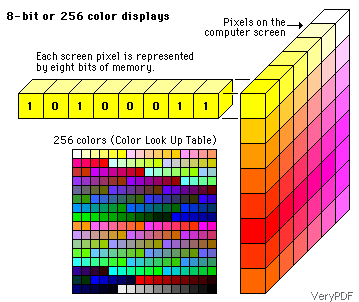 So, if you’re on a hunt for a new projector, make sure to be prepared to learn as much as you can about the ins and outs of a good projector. It is one of the most essential parts of the overall selection process.

Knowing the technical mumbo-jumbo will bring you a step closer to making a sound and informed decision so that you can balance the cost and the quality.

This decision will, in most cases, be influenced by the purpose you intend to use it for. Is it meant for PowerPoint presentations, or for watching HD movies?

So, knowing some of the major types of resolution is crucial in this process. There are a couple of them - XGA, WXGA, SVGA, FullHD, and 4K. Even though these acronyms might seem a little confusing ( which they are) in reality, it’s pretty easy to explain them. 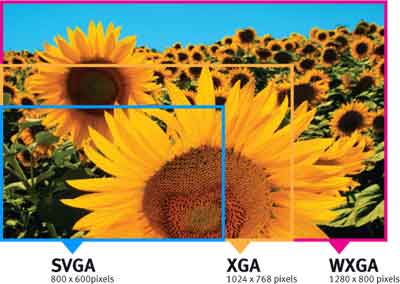 SVGA (Super Video Graphics Array) is the first among the mentioned projector resolution types, which became pretty obsolete over the years. When we talk about this resolution, then we mean 800 x 600 pixels and an aspect ratio of 4:3.

Although this resolution can provide some fine necessary details, it just falls behind the other resolution types and is more and more out of use.

The XGA (Extended Graphics Array) resolution comes as a slight improvement of the previous resolution. Although it offers the identical aspect ratio, the resolution is 1024 x 768 pixels or 786,000 pixels on a screen.

Thus, the amount of detail is much greater than on an SVGA resolution.

The improvements in the field of visual technology increased the need for a more detailed, widescreen image. That’s where WXGA (Wide Extended Graphics Array) resolution kicks in

With a resolution of 1280 x 800 pixels, it comes with a different aspect ratio, a wider 16:10. That way, the horizontal pixels come in greater numbers than vertical ones.

This type of resolution is a common one when it comes to entry-level projectors since they can offer an exceptional amount of detail and clarity, without forcing you to spend a lot.

When we talk about FullHD, it’s important to mention HD, which comes at 720p and is lower than 1080p. Often these terms are used interchangeably but are not the same.

When it comes to 4K projectors, they can produce some serious details and image quality. They do come at a price, though.

Which Resolution is the Best for You?

Even though there are projector models that offer a single resolution that is best suitable for specific usage, it’s much more likely you’ll run into models that are perfectly capable of being used for various different purposes.

So, the first thing you’ll look for is how high the resolution is. This number will affect the price, as a projector with higher resolution will be more expensive.

The second thing to consider is the number of resolutions a projector can support. This will give you more flexibility in the future.

And last but not least, you need to take your needs into account. If you don’t absolutely need to display high-quality graphics, then buying a top-of-the-line projector might be a waste of money.

Although the resolution is one of the most common specs that manufacturers use to impress their potential customers, it is not the most important when it comes to picture quality.

Having a projector that has a higher resolution than some other does not mean that you will get a better image as an end result. You will have to take some additional features into account as well.

But, it doesn’t hurt to have a high-resolution projector. It can only add to performance quality. We hope you’ve learned quite a bit from this guide, and are able to look for a new projector with more confidence.