Getting the best home theater experience is more attainable than ever, with the uprising popularity of 4K technology. Just when you thought projectors were obsolete, they started utilizing 4K technology.

So, it’s safe to say that for the most satisfying home movie experience, you need a quality 4K projector. If only they weren’t so damn expensive. Learn more about some of the best 4K projectors.

Well, make peace with the fact that high-quality home theater equipment will never come too cheap. However, the prices of some models have started to drop recently.

Here we’ve compiled an in-depth review of the Optoma UHD60 4K projector. Read on, and by the end of it, you will broaden your knowledge about its main features, and see if it’s something you might consider getting in the future.

If you take a quick look at it, it’s easy to notice that UHD60 is a beast. There’s just no going around it.

It is larger than most of its competition in the same price range. And although it will take up a large chunk of your room space, it will look pretty well in the process.

Having such a large case also contributes to reducing fan noise, which is always a good thing. Usually, smaller models tend to be noisier since there is no room to silence the noise.

When compared to the competition, the UHD60 has a thinner body. All in all, it seems like the manufacturers decided to cut down design costs.

Then again, the casework quality does not affect image output, so there aren’t really any consequences to it.

There’s simply not that much to throw you off your feet, design-wise. It does have an appealing and modern looking glossy finish, which, in all honesty, is something you can find on many competing models.

The manufacturer decided to position the lens right in the middle of the unit. Unlike almost all other Optoma projectors, which have the lens place to the side.

Sometimes this might pose an issue. If you’ve positioned the ceiling bracket prior to that, it actually could be nice to have the lens centered for a change.

This projector has a slightly recessed, 1.60:1 lens. If you want to adjust the focus, you will have to rotate the lens edge at the front. There's also a sensor (Infrared) for remote controlling the lens. It's placed in the front of the projector at the right side of the lens.

If you want to use any other lens controls, you can find them at the top of the projector, safely stored behind a large protection door.

Controls Are Blended in the Design

As far as the controls go, they are virtually invisible. There are only a few of them.

And since they are all small in size and white and placed on the left side of the device, it is a bit difficult to notice them, especially if you're looking from a distance.

And those control buttons are as straightforward as they get. Honestly, you don't need much more in terms of functionality, since you'll probably rely heavily on the remote control.

Although you might expect it to fall short in terms of picture clarity and quality, at least because of the price tag, you’ll be pleasantly surprised.

Not only it doesn’t disappoint, but it is bound to blow you away by rich details, pixel density, and overall image sharpness. When you get a chance to take a peek at just a couple of frames with this big boy, you’ll know what a real 4K should look like. 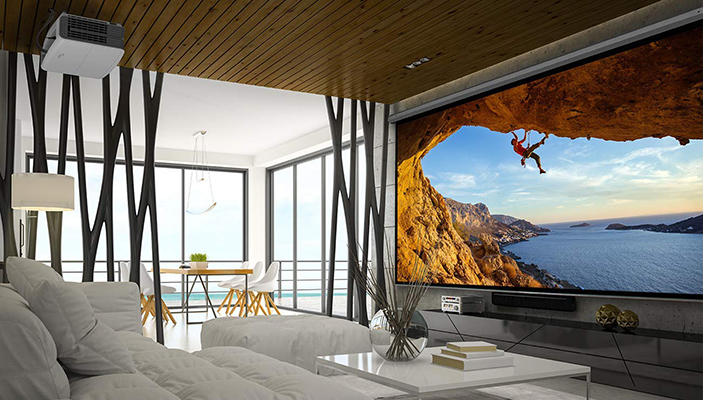 The detail levels are on a different level and can hold their ground even with much more expensive native 4K projectors. Which can be a bit of a shock since we’re talking about such an affordable model.

What’s even better is that those 4K details are sent to the screen without any grain or blurriness that can often be found in other projectors. All you get is a crystal clear and crisp image.

Colors, in general, look really vibrant and adequately saturated. This gives the projected image a much more natural and three-dimensional feel.

That being said, the Optoma UHD60 isn’t all that perfect. For starters, it struggles with handling HDR material.

Also, black levels could definitely be deeper and more defined. You could find better in some of the similar models (even in Optoma UHD65).

If you’re a gamer, there’s a recurring issue with input lag, which goes around 51ms if you’re in a Game picture preset. That is somewhat more than you’d want it to be, and can partially interfere with playing some of the faster games.

But, if you’re not a passionate gamer, that issue shouldn’t bother you that much.

Optoma UHD60 is geared with 3000 ANSI lumens, which is more than enough for almost any environment. Also, it is a perfect fit for rooms with plenty of ambient light. 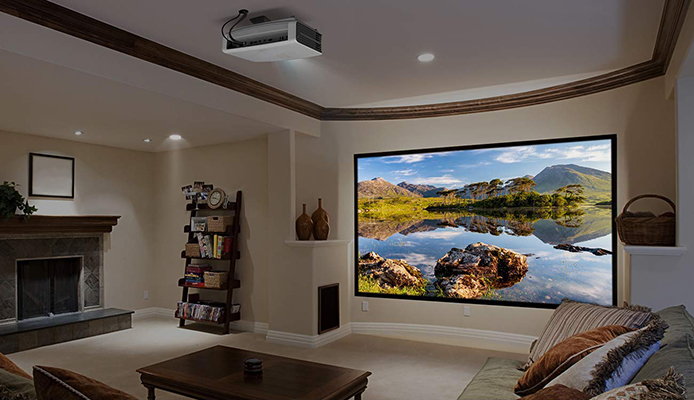 Such brightness is best utilized for gaming or movie sessions. When it comes to business presentations, that’s where UHD60 falls behind. Those levels of brightness can be too much for a presentation.

In such cases, the image tends to be a bit greenish. Then again, you can use it for presentations, but only if you don’t mind that issue.

Once you reduce the brightness, it will affect the white brightness, while the color brightness will remain unaltered. By doing that you will improve contrast and saturation, and overall image quality, especially in darker scenes.

The Optoma UHD60 4K provides enough connectivity options for everyone. There are two HDMI inputs, two USB ports, a VGA PC port, a 12V trigger and RS-232 and RJ45 ports. 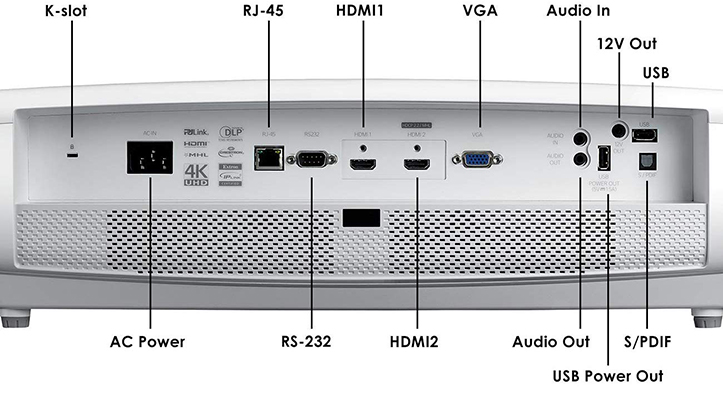 Although there are two HDMI ports, only HDMI 2 supports and handles 4K, MHL or HDR. The second HDMI port supports HDMI 2.0 and HDCP 2.2, while the first one supports only 1.4 versions.

The set up for the Optoma UHD60 is pretty straightforward. Because it has a 1.6x zoom lens, you will be able to utilize a throw distance of about 12 to 19 feet away from the screen.

And all of that on a 120“ diagonal. Take a look at this guide on how to calculate projector distance.

Since the viewing position is best at approximately 1.2x of the screen width, this will ensure you sit at about 11 feet from the screen. And the projector will be placed right behind your sitting position.

Seeing that the amount of noise is almost non-existent, the unit won’t affect your overall viewing experience. So, you won’t have to worry about isolating the projector.

Ceiling Mounted for the Best Output

The best possible position for this projector is if you mount it on a ceiling.

However, since the fan noise is at such a high level, you might even place it on some table between the seats. Just make sure to clear away at least 6 inches from both sides of the lens.

If you decide to go this way, know that the bottom of the image will be at the same level as the lens. And with such a big screen, you don’t want to go too high. 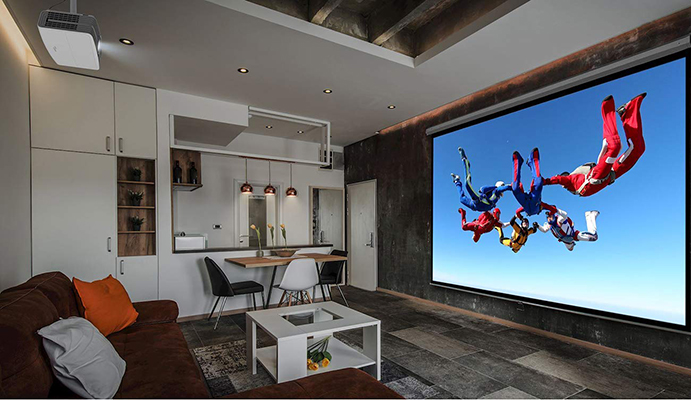 The least fortunate solution would be to put it on a back shelf and project the image above the heads of the spectators. By doing that, the projection image will be placed way too high up on the wall.

Then you’d be compelled to shift the image downwards. But, seeing that there’s no keystone correction, you wouldn’t be able to adjust the distorted image.

When you take the usual projector built-in sound systems into consideration, you get used to not expecting that much. In many cases, you’d even find them disappointing.

But, that’s not the case with this model. All in all, those two 4W speakers surprise quite pleasantly.

They provide quite a loud output with a solid bass depth, or as good as in any other projector. T

These might find good use in an outdoor movie setting and are excellent as a portable option.

That being said, they are not so well suited for long-time use. If you wish to set up a more serious home system, then consider getting a set of quality external speakers or a home theater system.

Surprising enough, HDR does not look well on Optoma UHD60 when turned on. Seeing that it usually does better on a projector than on a flat TV and that it provides a much more natural look, this might come as a bit of a disappointment.

It just simply doesn’t do that well on a 120“ inch screen. The projection image looks somewhat washed out, while the contrast is dull and lifeless. Learn more about HDR from this PC Mag’s guide.

All in all, the image looks a bit artificial, which can be distracting at times. Even though you could do without using HDR with this model, there are still some models that don’t allow you to separate it from 4K.

So, on such devices, you’ll be forced to watch HDR if you’re going to watch 4K.

Even though you might expect that the use of DLP technology that displays 4k content would result in smaller levels of heat, there have been some complaints regarding this. It can run under surprisingly high temperatures, sometimes reaching up to 115°.

As far as the noise goes, with the noise rating of 28dB, it has proved to be one of the quietest 4K projectors in that price range. This makes it an excellent choice for those who are sensitive to this issue.

As you could see above, Optoma UHD60 presents some serious value for money. It manages to provide pretty impressive results without ever being too much.

Considering it’s a DLP powered 4K machine that can stand up to even some of the pricier models, there’s much to love about it.

And when you take its strong sides into account, you’ll see why it’s such a popular model. Contrast depth, color accuracy and calibration, lens shift and quiet fan are just some of the aspects that make this model surpass the competition.

Granted, none of the 4K projectors are perfect in every sense of the word. There are a couple of flaws that come with this model, like some occasional input lag, or an underwhelming HDR.

But when you look at the big picture, it’s clear that it’s easy to get an exciting and engaging image projection out of the Optoma UHD60 4K. In short, it provides a truly immersive and enjoyable watching experience.