​The Optoma GT1080darbee Gaming Projector is a mostly great device. It is a great projector for gaming and produces gorgeous visuals. The projected image is very bright, Full HD, and has extremely vibrant colors.

This projector is any gamer’s dream come true. However, it does have quite a few issues holding it back from being perfect, like occasional lamp failure and a lack of a zoom ring.

Overall the GT1080 is a great pick for either home theaters, gaming or outdoor projector setups.

The Optoma GT1080darbee Gaming Projector is an overall terrific device.

It produces some of the most gorgeous visuals for gaming compared to other projectors. ​Being a projector, it produces an image much, much bigger than any TV screen possibly can.

Imagine playing video games like The Legend of Zelda: Breath of the Wild on a movie theater-sized screen. That is basically what a gaming projector can allow you to do.

As a gamer myself, this is something I have always wanted to try. Not only is this projector great playing video games on a large screen, but it lets you enjoy especially great visual quality as you do so.

It is also amazing for watching TV and movies, business presentations, and any other visual media you plan on using a projector for. This is a great option for a home theater projector.

This thing is really bright. The projector’s lamp uses 3,000 lumens. The more lumens a projector uses, the brighter it is.

The average projector lamp uses between 1,000 lumens and 2,500 lumens. There may be a lot of other projectors out there that are much brighter than this one, but this one is still a lot brighter than the average. 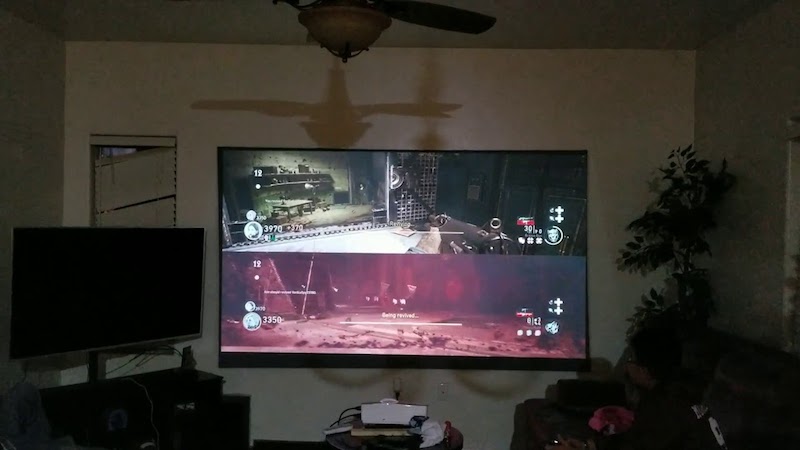 Being this bright is helpful for a lot of reasons. For one, it helps you to see the screen clearly even when the room is not super dark.

It is also better for your eyes. The brighter the projected image is, the less your eyes have to strain to see it.

The contrast ratio of this projector is 28,000:1. This particular contrast ratio indicates that that the whitest whites seen on the projected image are 28,000 times brighter than the blackest blacks.Because of this, each of the colors pop a lot more and stand out from each other.

This prevents colors from blending in with each other or appearing washed out.

This contrast ratio is much better than what most other projectors offer, and it helps to create a beautiful picture quality to look at. 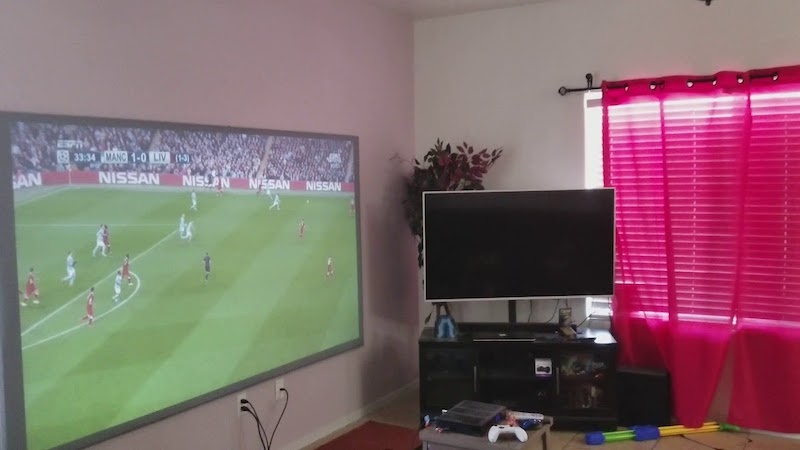 The projector has a resolution of 1920x1080p. This is considered to be Full HD. Full HD graphics always look incredible.

This is why HD has become the standard for visual media devices such as video game consoles, DVD and blu-ray players, televisions, and projectors.

HD graphics are what make your playthroughs of PlayStation 4 and XBox One look so realistic. Take a glance at our BenQ W1070 Review.

The fact that this projector is able to produce gorgeous HD visuals is incredible since it allows you to see those awesome images on a much larger screen than you otherwise would be able to. It adds a sense of realism and more enjoyment to anything you play or watch on this projector.

The lamp life of this projector is 8,000 hours long. There are definitely many projectors out there that have lamps that can last a lot longer than this. They can sometimes even last up to 50,000 hours.

However, these 8,000 hours certainly are not anything to scoff at.

Think about how long the lightbulb in one of the rooms in your house lasts. It is most likely nowhere near 8,000 hours, and yet you only have to change it maybe once or twice a year at most.

Also think about how much time you actually spend watching movies and playing video games. 8,000 hours would take an awfully long time to get to.

You probably will not have to replace the bulb for quite a long time.

The Optoma GT1080darbee Gaming Projector has a very short throw ratio of .49. The throw ratio of a projector indicates how far you need to have the device set up away from the wall or screen you are projecting on to. 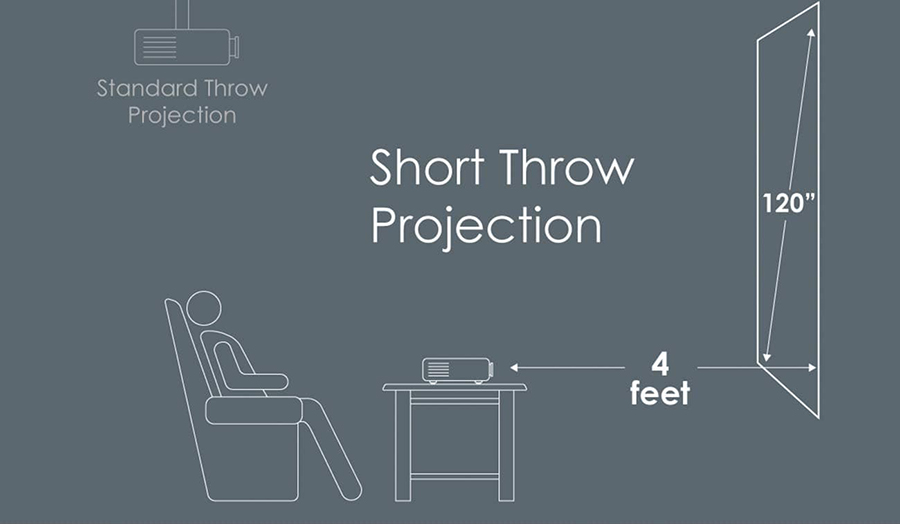 A throw ratio that is this incredibly short means that you are able to set the projector up on a coffee table, desk, in the center of your living room ceiling no problem.

This short throw ratio allows you to set the device up fairly close to the wall or screen and still get a huge, gorgeous picture. This is absolutely perfect for those looking to use it for gaming in dorm rooms, bedrooms, or any other smaller space.

Just be warned that if you do have the projector too far away from the wall or screen, it can cause the projected image to appear much blurrier than you would want.

If you want more check out our guide to the best short throw projectors.

Compatible With Most Devices

This projector is also compatible with just about any other kind of device. You can use it with video game consoles, DVD and blu-ray players, TV sticks, smartphones, tablets, laptops, and more. Even though this is a great gaming projector, it can be used for almost any function involving visual media. 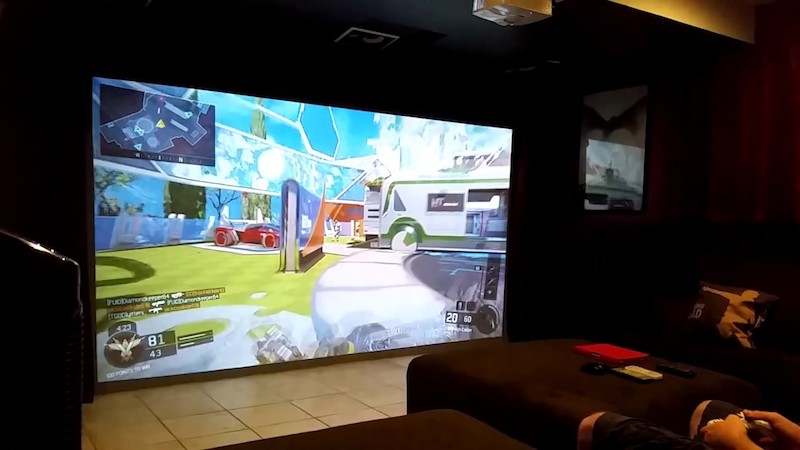 Input lag and low frame rates can hurt any gaming experience and make or break an online match when you are about to win, so this mode is a saving grace.

Even though this is a fantastic gaming projector, it does have its fair share of problems. Visual noise can often be seen on the darker tones on the projected image. In other words, a lot of blacks or dark colors on the screen can look staticky.

This can certainly be annoying and even break immersion into your video games and movies. It can also make some important items hard to see when it happens.

Another problem that this projector can sometimes suffer from is early lamp failure. The lamp life of the projector is indeed 8,000 hours long. However, it does not always come close to reaching that length of time. 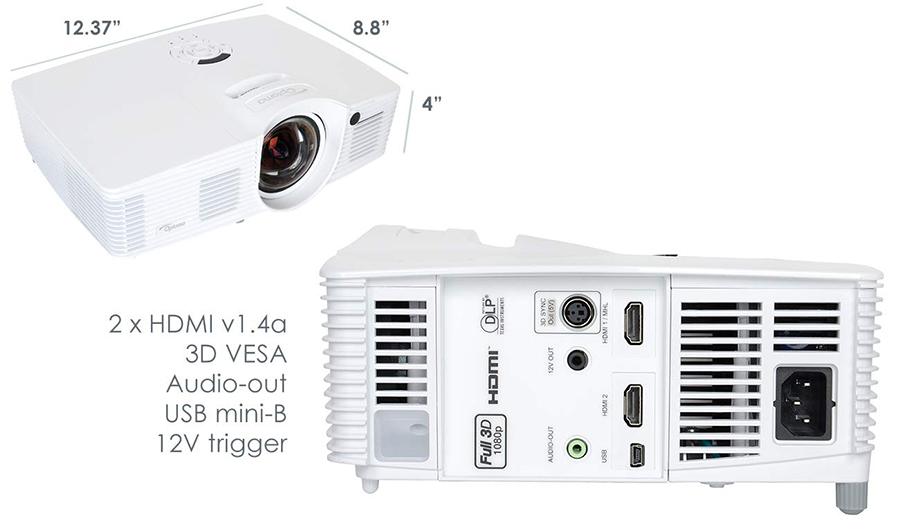 This device has been known to have its bulb die out after 50 to 100 hours, causing you to have to replace it a lot sooner than you really should have to. This does not always happen, and when it does, replacing a bulb after 100 of use is really not the end of the world.

A truly annoying issue this projector suffers from is the lack of a zoom ring. A zoom ring on a projector allows the user to adjust the size of the projected image just by simply turning a dial or knob around the lens of the device.

It is there to make things easier. Most projectors tend to have them these days.

Because this projector does not have a zoom ring on it, in order to adjust the size of the screen, you have to physically pick up the projector itself and move the whole thing. This can cumbersome, and almost impossible for some people depending on their living space.

This projector has a bad habit of flickering after a few hours of use. If you plan on having particularly long gaming sessions, they can be interrupted by annoying flickering.

This can cause headaches and break your immersion into your video game or movie. If this happens, it is recommended to shut the device off until it cools before using it more.

The Optoma GT1080darbee Gaming Projector has especially weak audio for a projector. It does come with a built-in speaker, which is nice. However, it is so weak that it is difficult to hear anything out of it. This is awful when you are trying to hear your game’s audio.

I can see it being a huge issue if you are trying to communicate with teammates in an online video game like Call of Duty. It is heavily recommended that you use some sort of external speaker for this projector.

Ultimately, the Optoma GT1080darbee Gaming Projector is a pretty decent projector for playing video games on. It is not the absolute best choice for a gaming projector, but it definitely gets the job done.

It has gorgeous HD visuals and a helpful short throw ratio, allowing anyone to be able to play video games and appreciate the best out of modern gaming graphics. It does have some major issues, but some are easy fixes or just inconveniences more than anything.

If you are willing to shell out around $800 for your gaming projector, this one would not be a waste.

Let us know what your opinions of the Optoma GT1080darbee Gaming Projector are in the comment section.