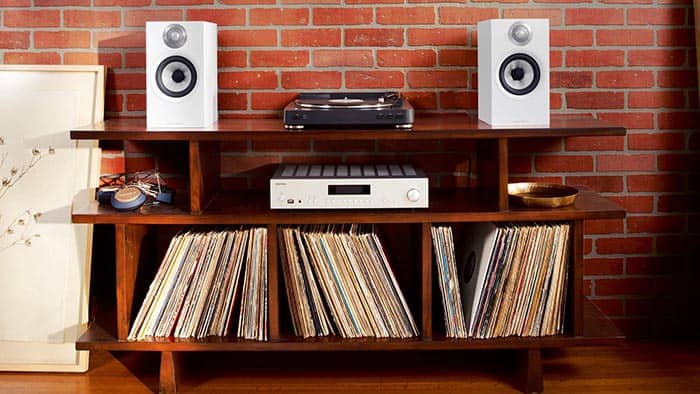 How To Choose Bookshelf Speakers

There's no denying it - big speakers give you massive and robust sound. Power and force you simply can't get with smaller speakers.

But many of us mere mortals don't have the available space, money, or sometimes even desire to go big. Sometimes you might want to go with something subtle and small-scaled that can simultaneously give you a fantastic experience.

That's where bookshelf speakers come in. As the name implies, their size allows them to be placed on a bookshelf, or any other similar surface such as a desk, speaker stand, or a table.

The main point is they can produce some seriously good sound while coming at a fraction of the cost when compared to some bulkier models.

Read on, and find out what you should look after when searching for the best bookshelf speakers for you.

Quick Navigation
Do You Want Wired or Wireless Speakers?
What's The Best Size For You?
Sound Quality
Speaker Placement
Matching the Speakers to an Amp
In Conclusion

Do You Want Wired or Wireless Speakers?

First of all, before you go with a purchase, you need to decide whether you want a wired or wireless set of speakers. It's a rather simple choice.

However, there's more about it than just personal preference. It's about convenience, and what you get from them as the end result. 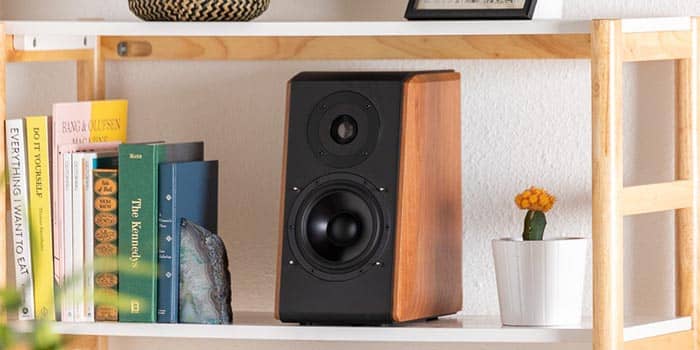 Naturally, wired speakers will take up much more room and possibly create clutter in your room. Dealing with a bunch of cables doesn't always seem like the most appealing solution.

On the other hand, wired speakers tend to provide a better, more reliable sound quality. In most cases, you won't be able to get such sound from wireless speakers. That being said, in order to get such a boost from bookshelf speakers, you'll probably have to get a separate stereo amp.

Now, when it comes to convenience, wired speakers can't match the wireless ones. Setting up wireless speakers is a breeze. All you have to do is connect your speakers via Wi-Fi or Bluetooth, and you're good to go.

Also, with wireless speakers, you'll usually get a broader choice of connections, making it easier to hook up various different things.

However, take all this with a grain of salt. Although generally, these rules apply, don't be surprised if you find wireless speakers that sound better than wired ones or wireless speakers that have a more extensive range of connections. But, this could be an excellent base to start your search for the perfect bookshelf speakers for your Hi-Fi system.

What's The Best Size For You?

People often mistakenly think that the size of the speakers determines the sound quality as well. But that's simply not the case.

On the other hand, the size does bring more volume to the table. This is due to the larger speaker drivers, and bigger space for amplification circuitry. Therefore, if you're on a hunt for bigger sound, then go and choose larger speakers.

There's one downside to large size. As you might have guessed already, they take up more space and can be bulkier. So, placing them on a bookshelf might be a harder task than you imagined.

If you prefer subtlety, then smaller speakers are your first option. They are just so easy to move around and fit anywhere.

When it comes to sound quality, bookshelf speakers manufacturers have raised the bar, and now it's easier to find at least a decent model. Rarely you'll find a model that sounds too lousy and fake.

That being said, bookshelf speakers have their drawbacks. Most of them come down to their size.

Since they have a smaller stature, it's virtually impossible to place a higher number of drivers. Or to make them bigger, for that matter. And since the drivers are responsible for generating sound, it's hard to expect them to perform the same as massive pieces of equipment.

Usually, you'll run into bookshelf speakers that have two drivers, one for high and one for low and mid frequencies. This means that they simply won't be able to produce bass on a thunderous level. Unlike a pair of good floorstanding speakers that will work much better in this department.

Naturally, this doesn't have to be the case. You could come across a model that offers some excellent bass reproduction. However, be prepared to pay a lot more for such a model.

If you are not a fan of music that relies heavily on bass, you can go by with a simple pair of bookshelf speakers. Otherwise, if you enjoy that massive, roaring bass, you should consider getting an additional good subwoofer to enhance the low-end audio.

The best way to get the most out of your speakers is to take your time and position them correctly. That way, you'll ensure they'll work as they were intended to.

So, if you're able to place them at a proper height, maybe on a dedicated stand, and pointing at you, you'll get more than satisfying results. 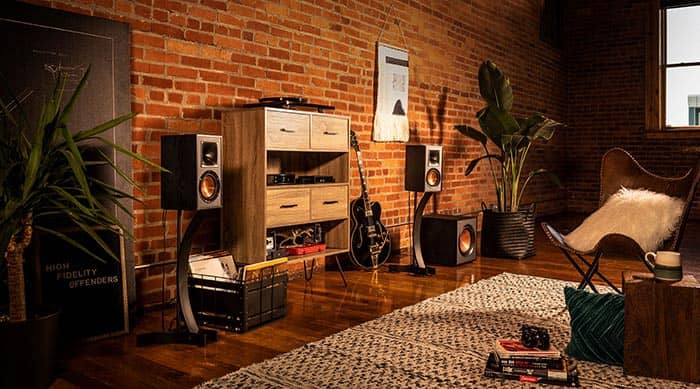 However, most of us don't have the right conditions that will allow us to check everything off from the positioning list. More often than not, you will have to work with what you've got.

Your speakers will work just fine when placed on a bookshelf (as they are supposed to), or any other similar surface. Some models have an option included that allows you to set the distance from the walls or any other surfaces and adjust the sound accordingly.

Nevertheless, you should follow some basic principles, no matter which model you get in the end. Make sure that you move the speaker slightly away from the wall to allow the low-end frequencies to flow naturally.

Also, if possible, position the speakers in such a way that the tweeter sits right at your ear level.

Matching the Speakers to an Amp

If you decide to go with the passive speakers, you will need to connect them to an amplifier. In such a case, you'll have to match the speakers to the amp to make sure that the amp sends enough power.

You don't want them to send too much, or not enough power, cause that could either harm the speakers or, in the best-case scenario, hinder audio quality. But, doing that isn't easy, although there are some general guidelines to follow.

It would be best if you aimed to match the amp's output power with the speakers' amplifier wattage. At least to some degree.

For example, if the speaker amplifier wattage is rated from 20 to 200 Watts, then you should find an amp with output power in that given range.

The best thing about bookshelf speakers is that you can easily obtain one for a reasonable price. You don't have to pay an arm and a leg to enhance your audio experience.

Even the cheaper models can surprise you and perform exceptionally well. That being said, the higher you go with the price, the higher the chances of you hitting a home run. But, for a couple of hundred bucks, you'll be able to get some more than respectable options.

Then again, if you really feel the need to spend a couple of thousands, you'll be able to find such models as well. Whatever you decide in the end, you'll notice the difference right away!