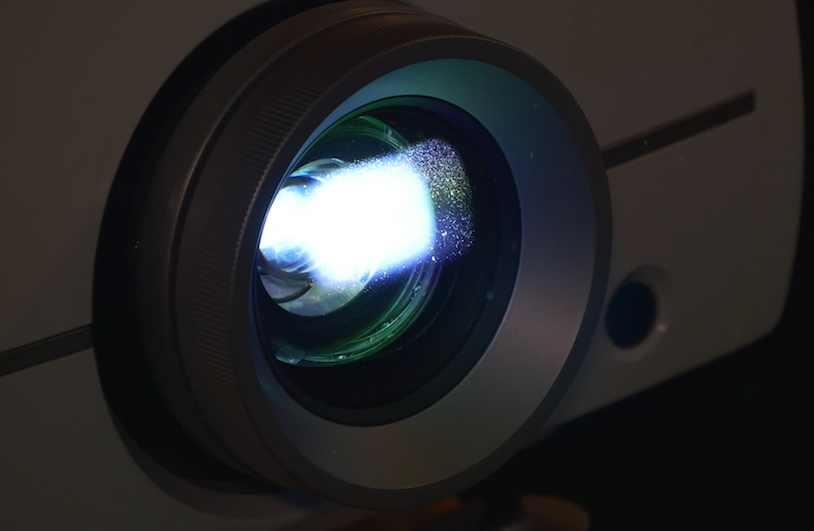 The projector lens is one of the most essential components of any projector ( if not the most). There are just so many aspects of a lens that make a projector what it is.

Throw distance, throw ratio, zoom lens, lens shift, and keystone correction are all crucial features that need to be accounted for.

We've made a quick recap of what makes a good [projector lens and what you need to pay attention to. Read on and find out more.

Simply put, throw distance represents the distance from your projector to your screen of choice. Or, in even simpler terms, it is the closest and furthest where you can place your projector and still get a clear and sharp image, without the loss in focus.

The word throw is there simply to describe that the image is literally thrown onto the screen. It is one of the most critical features of any projector. Once you're aware of what the throw distance of your projector is, then you'll know what you can or cannot expect from it.

Be advised, throw distance is specified not only just as a maximum distance but also as a minimum. Therefore, in the product specs, it will usually be denoted as a range from minimum to maximum. For instance, if a projector has a throw distance that is ranging between 5 and 30 feet, it means that you'll be able to place your projector 5 to 30 feet away from the screen and get a good, quality picture.

You'll just have to use a zoom lens to adjust the focus for your desired distance.

Depending on their range, projectors can be classified as short-throw or long-throw. Short-throw projectors can and should be placed in close proximity to the projector since they have a short-range.

You can even find ultra-short-throw projectors on the market, which can come even closer to the screen surface.

Then again, you can easily calculate your desired projector throw ratio depending on the distance and the screen size. So, for example, if your screen width is 10 feet and you want to place your projector 15 feet away, then you can just do some simple math and divide 15 by 10.

Therefore, you'll need a projector with a throw distance of 1.5. Now you know what to get and what kind of model to look for.

Likewise, if you already know where your projector will stand, you can easily decide what screen size would be optimal for you.

A zoom lens is one of those features that is more and more present with new models. In short, it allows you to change the size of the image without actually having to move the projector.

Once you pay attention to projector specs, you will see that there are two types of zoom - digital and optical. Knowing the difference between the two is essential.

The optical zoom lets you increase the size of a projected image by extending the lens, without hindering the picture quality or having to move the device. Sometimes you'll even be able to enlarge the image two times without affecting its quality.

That means that you could place the projector further away without damaging the output quality.

Digital zoom in projectors crops the image, and then it makes the pixels bigger, and therefore the size of the projection. That means that you could also place it further away, and have a larger picture.

Unlike optical zoom, digital zoom affects the image quality, since it leads to bigger pixelation.

Also, there are two additional types of a zoom lens - manual and motorized. The manual lens is adjusted when a user stands next to a projector and manually tweaks it. On the other hand, motorized lenses let you use a remote and correct the image from afar.

Both of these have their upsides and downsides. That being said, each of those beats not having a zoom lens at all.

Another essential projector feature is the lens shift. Since it's not that easy getting the projection picture to sit perfectly centered across the screen, you'll have to do something about it.

In fact, it's next to impossible to get the image centered flawlessly just by moving the projector around. That's where lens shift steps in.

In simple terms, it lets you move the lens in different directions, right and left, up and down, within the casing. In turn, this means you'll have more flexibility in finding the best place for the projector.

So, if the projected image is in any way crooked and tilted, the lens shift will make the adjustments for you without the need for physically moving the device. To avoid that, the lens is moving inside the housing.

Lens shift can be achieved either manually or remotely. Most projectors offer manual controls that come embedded in the projector, while other more expensive models provide remote control of this feature.

More often than not, you'll find that the image is not rectangular when using a projector. And since most projectors throw the image a bit above, to avoid getting in the line of sight, it can lead to keystoning.

That means that the image is not perpendicular to the screen surface, but is tilted down, up or to the side. In turn, you wind up with a trapezoidal projection. And you'll want to avoid such distortion.

Digital keystone correction, on the other hand, lets the device digitally alter the data and shape the screen into a perfect rectangle. This allows more flexibility when it comes to placement, both horizontally and vertically.

However, it comes with its drawbacks, since digital correction tends to scale the image and thus shorten the longer side of the picture.

Now that you've read our guide, you can see that it's the lens that makes the projector do its magic. Thus, it's one of the first things you should check and examine when shopping for a new model. Hopefully, we've helped you with that!