Epson has made another great projector with the Epson Home Cinema 2040. If you’re looking for something small, portable, bright, and great whether you’re playing video games or just lounging back and watching movies, you’ll enjoy this projector.

There are many things we like about the Epson 2040 other than its small size. This is a 3LCD projector that is bright and very colorful, so there’s no need to worry about any DLP problems like the rainbow effect.

We also like that the Epson 2040 has a lot of connection options with its two HDMI ports and streaming possibilities. This comes really in handy if you’re a gamer and you plan to connect your console to the projector. Like us, gamers will love this projector with its low lag and great frame interpolation. 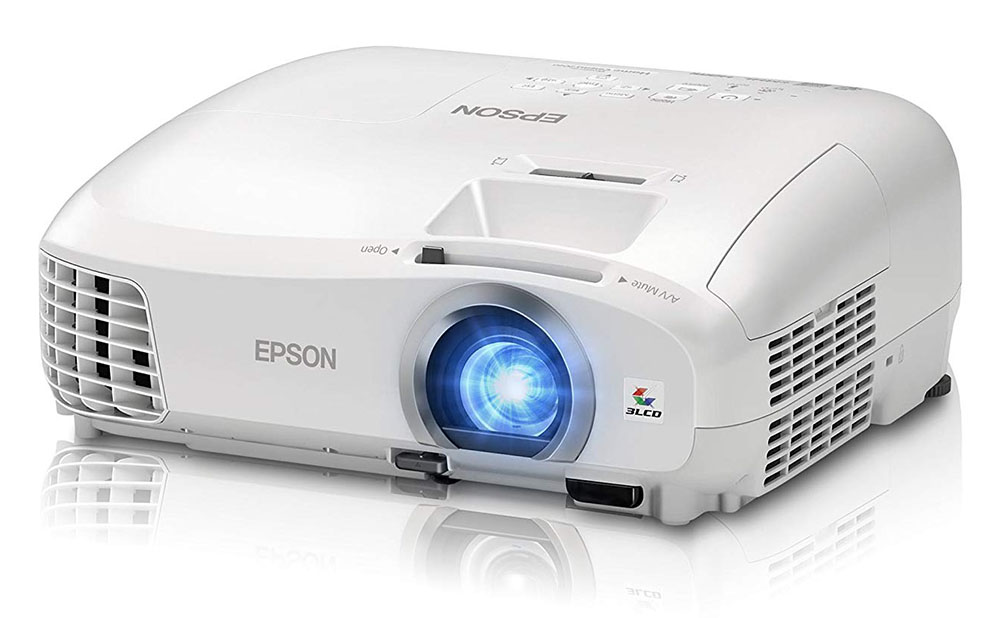 If you’re looking for a home theater projector that you can game on, take outside with you, or just mount and enjoy, then you’ll appreciate the Epson 2040 for all of the capabilities and features that it has. 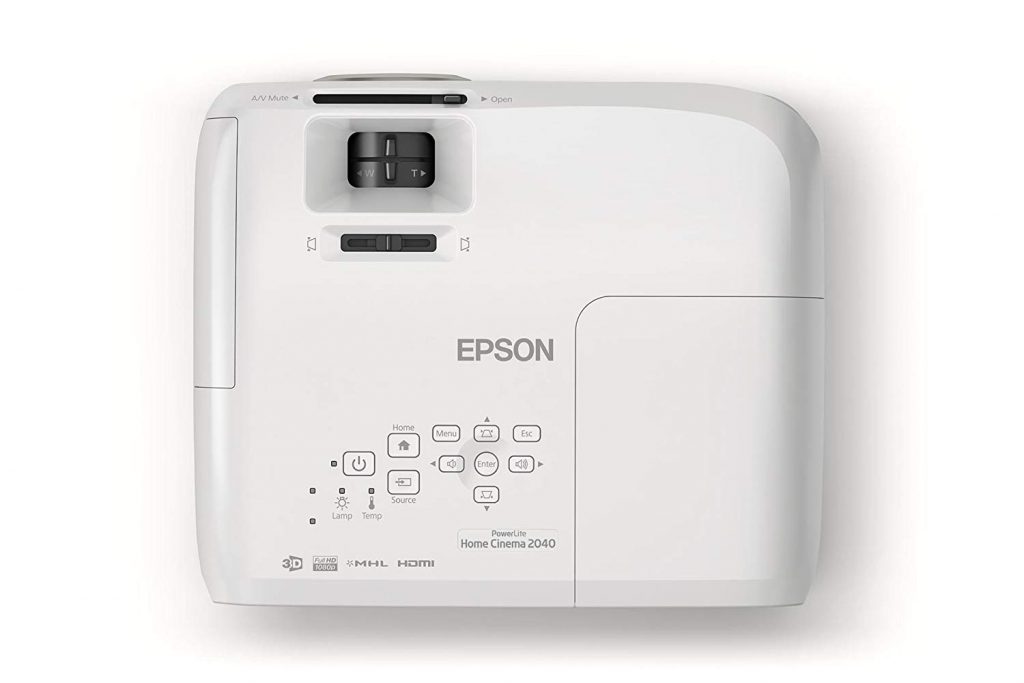 The Epson 2040 comes with a large number of features that make it a strong projector not to just glance over.

Epson offers a lot to any home theater enthusiast, starting with a 2-year warranty to help you with any possible problems that may occur during that time.

The 2040 has many great build features such as its portability. Being small and light, you can bring the 2040 with you anywhere and won’t have to worry about just mounting it in one place.

With portability like this, you can bring the Epson 2040 to a meeting, outside, or anywhere else you could possibly think. See related - best portable projectors.

The 2040 also has a built-in 5W speaker and is pretty easy to set up and operate. It’s biggest features are in its highly advertised 2 HDMI ports and versatile connectivity.

You can connect your PC, Mac, cable/satellite box, gaming console, streaming device, Blu-Ray Disc player, and much more to the 2040.

You can even stream HD videos to the 2040 through MHL-enabled devices, including ChromeCast and the Roku Streaming Stick.

The 2040 has a long lamp life of 4,000 hours, or 7,500 on ECO mode if you give up some brightness quality. This means that you can use the Epson 2040 every day to watch a movie and it will last for multiple years - which is great!

The 2040’s picture quality also comes equipped with strong features. Projecting in Full HD, you can watch both 2D and 3D videos on the 2040. This is a big deal; 3D is one of the most sought after features today, and it’s great that this home theater projector has it.

The 2040 is bright and colorful with great color saturation and brightness that some find good enough to use in ambient light. Along with its high contrast, the 2040 has a sharp edge to its pictures that make them great overall.

Its last features are its smooth, crisp images from its image enhancement and frame interpolation. Image enhancement does exactly what it says, enhancing images to be brighter, sharper, a higher resolution, and better overall.

Frame interpolation adds in frames where they’re missing to make your movies and games flow smoothly and fluidly. This is a great feature, especially for playing video games and making sure your scenes aren’t choppy.

The Epson 2040 has a lot of strengths, but also a couple of weaknesses. The first thing that must be mentioned is that the 2040 is discontinued. You can still buy it from sellers online, but Epson no longer sells it and it will be hard to find a new one.

That may be a dealbreaker for you, but, even if it isn’t, the 2040 is still a great projector and we’re about to tell you why. If you're looking for an alternative I strongly recommend the Epson Pro Cinema.

When it comes to the 2040’s build, as mentioned before, the 2040 is portable and can be brought anywhere. If you’re looking for a projector that you don’t have to worry about mounting or isn’t heavy and hard to bring places, then the 2040 will be perfect for you.

Whether you mount it or not, the Epson 2040 is very easy to set up and use, so there’s not much to worry about when carrying it from place to place. 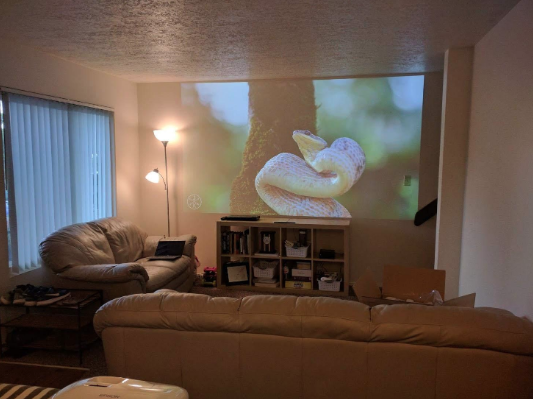 One big thing people dislike is the 2040’s very loud fan which makes it very hard to concentrate on movies or games with a loud fan buzzing in your ear.

Some avid projector users also may be worried about its lamp life, but with cheap less than $50 replacement bulbs, there’s not that much to fear.

Putting it on Eco Mode both makes its fan almost silent and lengthens its life by almost double, but this costs brightness. It’s up to you whether not having high brightness is a good exchange for a longer life and quieter fan.

The 2040 is well suited as a home theater projector but it's not a great choice for outdoor movie watching.

Another problem with the Epson 2040’s build is its remote which has no backlight, making it very hard to see in the dark. The 2040 also has no lens shift, something that every projector user looks for, so you can’t shift the picture to where you want.

But the 2040 does have amazing picture quality. We’ll go more into this later, but a short look into it will show you that the 2040 has amazing color, contrast, and brightness.

With beautiful 2D and 3D images in Full HD, the 2040 projects astounding pictures that many love. We also think the 2040 is a great choice if you're looking to save some space in your living room with a projector tv. 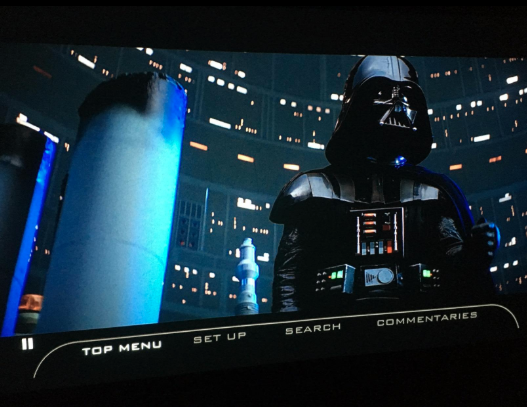 The 2040’s 3D is amazing and well-loved. There is a con with this, though, the 3D glasses don’t come with it. They don’t cost much, but many wish that they would’ve been included.

There are problems with these images though, such as the 2040’s bad black levels and its problems adjusting from bright scenes to dark scenes. Most of this is fixed by being in a very dark room.

This brings us to our next biggest problem: ambient light. There are just as many projector lovers saying the 2040 is bright enough and great in ambient light as there are saying the opposite.

Generally, it is bright enough in normal mode, but this depends on the amount of ambient light and the viewer himself.

The lasts of its pros are that it is amazing for gaming, as we will discuss later, and has a great overall value. This projector is worth it. If it being discontinued discourages you and you wanted a new or updated version, there is the Epson 2045.

The only difference between them is that the Epson 2045 has MiraCast and Intel WiDi which allows mirrored streaming from an Android phone, tablet, or Windows laptop with an Intel processor. Check out our Epson 2045 Review for more.

One of the Best Gaming Projectors

The Epson 2040 is great for gaming whether you’re inside or out. Its great brightness and an immense amount of colors help to project video games beautifully onto your screen.

In Full HD, which almost all games are created for nowadays, you’ll be sure to have immersive and alluring experiences with gaming. 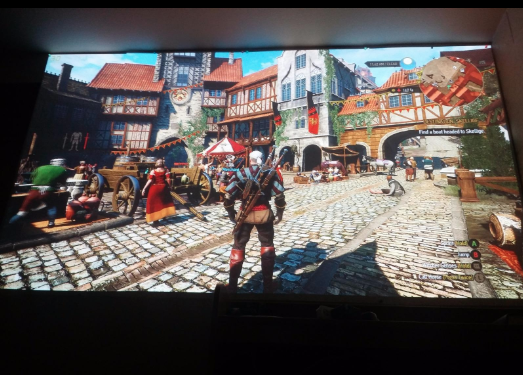 Its almost unnoticeable 25ms lag is great for gaming and makes this one of the best gaming projectors out there.

The only other thing that adds to this is the 2040’s frame interpolation making sure to add frames when they’re missing to make your gaming experiences smooth and clean. If you’re a gamer, you will thoroughly enjoy this product.

Here’s a video of someone gaming on the 2040 to show you how great it is:

The Epson 2040 has an amazing picture quality, though it isn’t perfect. The 2040 casts up to 332” of beautiful images that are sharp, bright, and vivid in Full HD for both 2D and 3D images.

With its bright 2,200 lumens, the 2040 projects amazingly in dark rooms and outside at night. It’s even good enough to project in ambient light for some.

One of the things that many people enjoy about the Epson 2040 is that it is 3LCD. This means that there won’t be any rainbow effects when using the 2040 as there would be if it was a DLP projector.

There are those concerned that this means the 2040 won’t be colorful enough, but this is untrue.

The Epson 2040 has 2,200 color lumens, which means it brings up to three times brighter colors than the leading competitive projectors out there. The Epson 2040 projects in full color up to 1.07 billion colors.

This is obviously a large amount, making your pictures very colorful and beautiful. It even has great color saturation which you’re sure to fall for.

With its image enhancement and frame interpolation, its images are enhanced to be the best that they can be and you get clear and fluid pictures in gaming, movies, and TV. 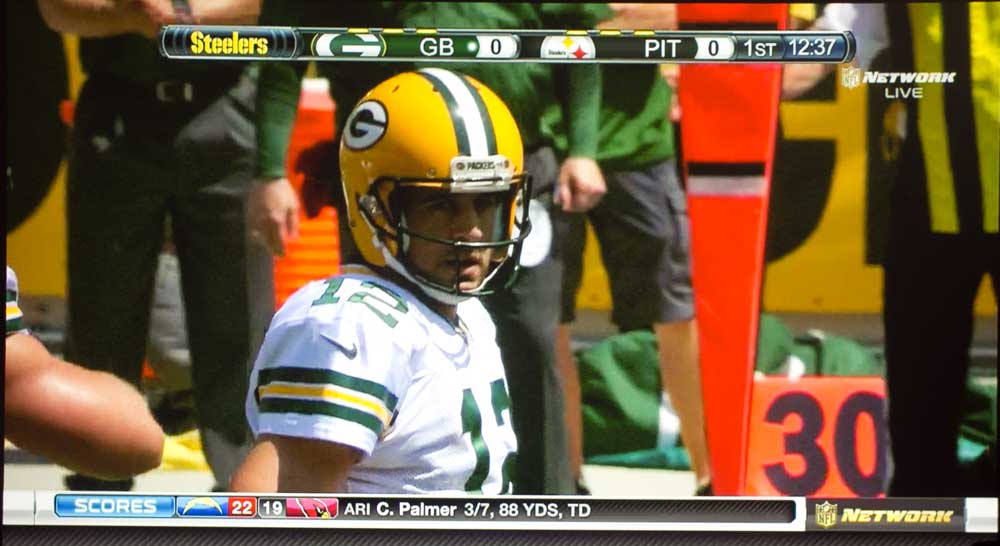 The Epson 2040 has a native aspect ratio of 16:9, the most common widescreen ratio out there. You can resize this to 16:10, a wider widescreen, or 4:3, the ratio older TVs and computers use.

Switching to 16:10 makes the picture more movie-like and amazing. Many love watching movies in widescreen, becoming more immersed in the 2040’s THX-like images.

The 2040 falters with its weak black levels - which is a brightness problem. Black levels determine the darkness that a projector can reflect. Having weak black levels means that you are unable to make out details in the image’s darker areas.

This problem seems to be seen most when the image dims based on the white and blackness on the screen as it adjusts from bright to dark scenes. This is the most common problem with its picture quality but isn’t that bad when in a dark room.

Overall, its picture quality is amazing.

If you’re looking for a home theater projector then the Epson Home Cinema 2040 is a great choice. Whether you plan to project movies, games, or just watch TV, the Epson 2040 will make your experiences more immersive and encaptivating with its many great features.

Portable and projecting in 2D and 3D images in Full HD with full color and great brightness, the 2040 brings an excellent picture quality wherever you go inside or out.

Though it isn’t perfect with weak black levels, a loud fan, and that it’s discontinued, this projector is still great for its value. If you want a new/newer projector, then the Epson 2045 is a great choice, as mentioned before. It has the same problems as the 2040, except it isn’t discontinued, is just as great, and has MiraCast and Intel WiDi.

If you're looking for other Epson units check out our reviews on: