Epson 2045 Projector Review – Read This BEFORE You Buy

It’s necessary to read the reviews on any product before you buy it just to make sure that it’s worth the money and everything it promises is true. Well, with the Epson Home Cinema 2045, there’s no need to worry because it is more than just its promises. This is an exceptional projector with great capabilities that many projector-lovers are fond of.

We like the Epson 2045 for many reasons. Two of its best traits are that it delivers great picture quality and brings a movie-like feel to your screen. This goes for whether you like streaming or projecting video games, TV, or movies; the Epson 2045 will suit your needs. Inside your house or outside in the backyard, the Epson 2045 makes for a great home theater projector with a bouquet of colors and a lot of brightness.

There’s a lot to enjoy with the Epson 2045 including its connectivity options, widescreen projections, and well-loved 3D. Whether you’re wirelessly streaming through Roku, Chromecast, or MiraCast and Intel WiDi or using one of its two HDMI ports, the Epson 2045 makes for a great projector with a lot of potentials.

Of course, you’re here for a better break down and review than just a, “Get this, it’s great!” Overall, there are several things to look for when buying a projector: picture quality, brightness, throw ratio, contrast ratio, size, connectivity technology, lamp life, key features, and much more. We break down the all of this for the Epson 2045 here for you.

Overall this is a solid competitor for the best home theater projector crown. 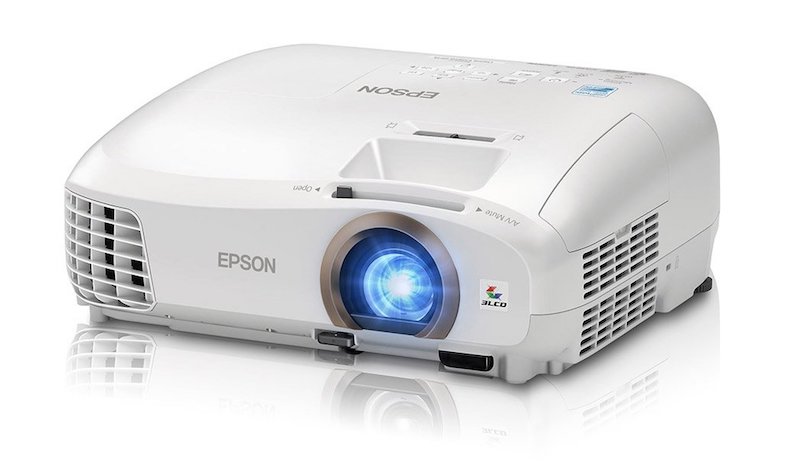 The Epson 2045 brings a lot to the table, but, sadly, when there are strengths there are also weaknesses. There are tons of things to love about this projector. The first of these is that its small weight and size makes it very portable, as we mentioned before. Take a look at our BenQ W1070 review.

Not only is it portable, but the 2045 has many connection options including its USB, VGA, and boastful two HDMI ports which allows you to connect to game consoles, phones, laptops, Blu-Ray, cameras, and so much more. Cords aren’t everything, though. As previously mentioned, the Epson 2045 has wireless capabilities as well with wireless streaming through the Roku Streaming Stick, Chromecast, or MiraCast and Intel WiDi. This allows a mirrored streaming from an Android phone, tablet, or Windows laptop with an Intel processor. All of these allow for great connection possibilities overall. Topping it off, the Epson 2045 is very easy-to-use. 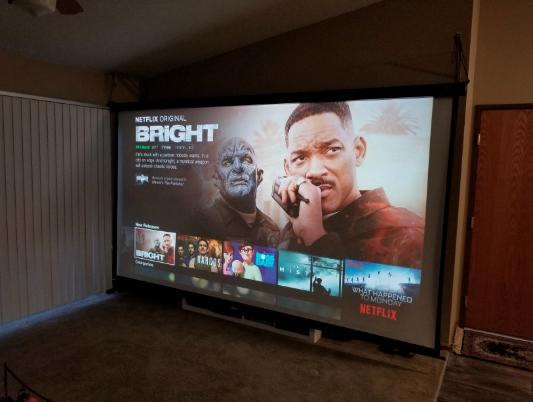 The MiraCast is what separates the Epson 2045 from its predecessor, the 2040. So, if you’re not interested in wireless streaming and mirroring then you may want to settle for the cheaper Epson 2040 instead.

The Epson 2045 has a great value for its cost. It has one of the most sought after properties of 3D and projects large images up to 332 inches in Full HD. The only problem is that you have to buy additional 3D glasses because it doesn’t come with them. With its THX widescreen projections, the Epson 2045 makes you feel as if you’re in a movie theater. 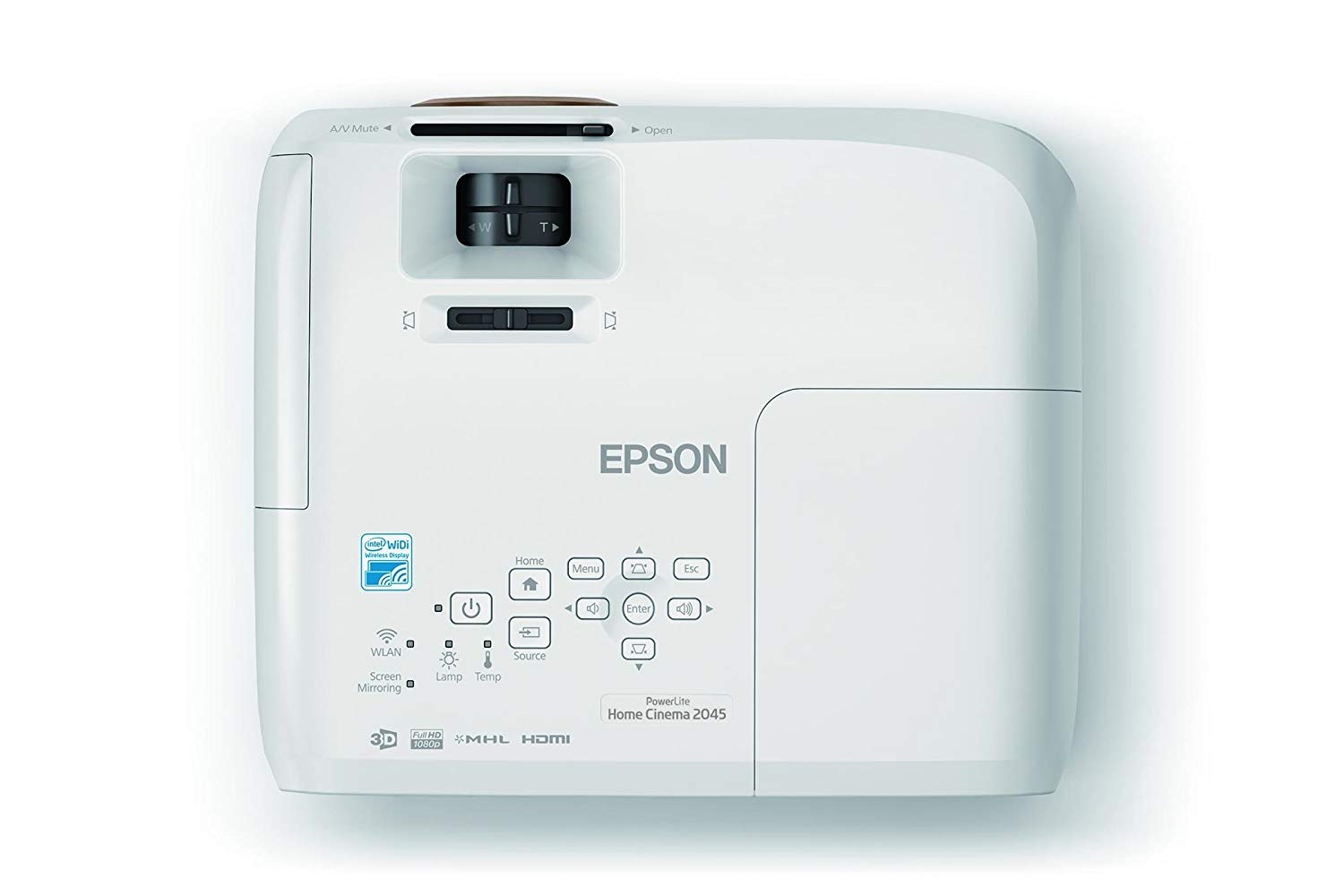 We will go more into the Epson 2045’s image quality later, though this is where the projector both has the best and worst problems. In short summation, the overall picture quality is amazing and very colorful - though it isn’t always great. Though some people say this projector is great in ambient light, there are also those who claim it’s only good in the dark. Factually, its picture quality is best in the dark, as with most, if not all, projectors. Depending on your preferences and amount of ambient light, this projector may or may not be bright enough for you if you use it outside of darkness. 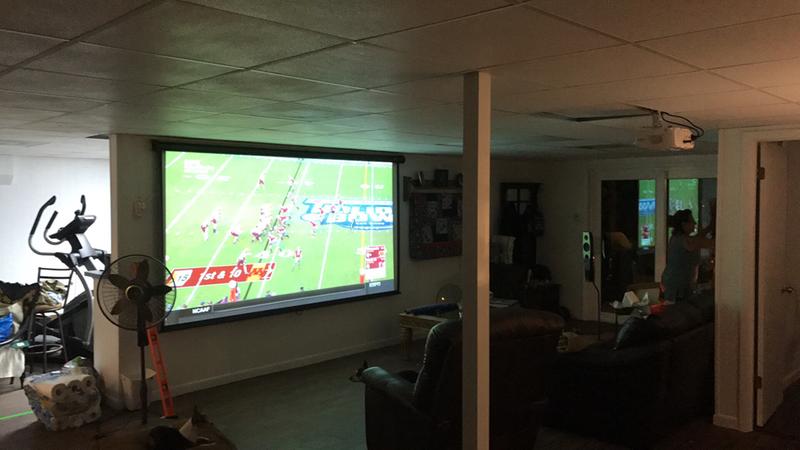 The only other problems with this projector are its remote and loud fan. Its remote isn’t illuminated, and some say it’s horribly constructed and find it hard to use in the dark. There is an easy solution to its fan if you sacrifice brightness by turning on Eco mode. This causes the fan noise to go away since it is operating with less power.

Regardless of these cons, the Epson 2045 maintains to be a great projector overall with all of its pros.

The Best Outdoor Projector for Gaming

The Epson Home Cinema 2045 is the best outdoor projector for gaming. Most gaming nowadays uses Full HD, which the Epson 2045 produces amazingly. Along with its large amount of color and bright resolution, your games will be vivid and lovely to play - even outside.

Here’s an image that one gamer playing Pac-Man took outside using the 2045: 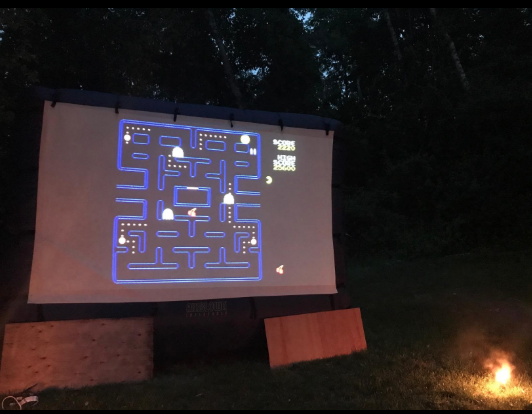 The 2045 is a very fast projector for gaming with little to no noticeable lag. Here’s a video of one gamer enjoying Black Ops 3 on the Epson 2045:

Overall, gamers love this projector whether they are gaming inside or outside.

The Epson 2045 has great overall picture quality. While many people wouldn’t believe that a projector with only 2,200 lumens of white brightness would be bright enough for both ambient light and outside projection, this projector is known for being very bright. There are iffy reports on its overall performance in ambient light, but most projector users say that this projector is great in any environment and on any screen.

Here’s a user projecting onto his own homemade screen. Please don't laugh at the screen. 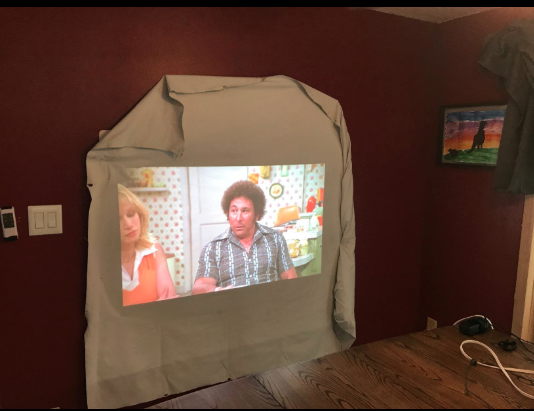 And here’s an image from afar by a user projecting outside: 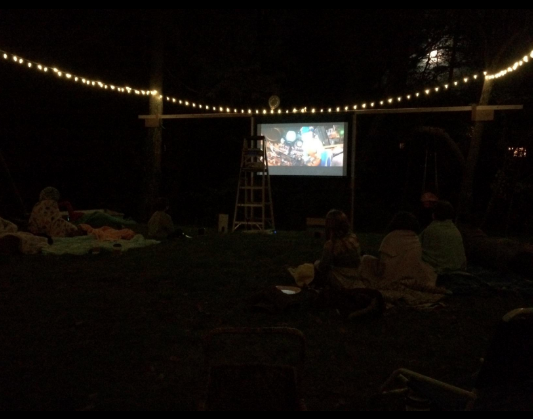 While it's not bad in terms of outdoor projectors if that's what you're looking for I'd say take a look at our best portable projectors.

The 2045’s brightness is just one aspect of its best qualities. It is also very colorful with 2,200 lumens of color brightness. With a nice arrangement of up to 1.7 billion colors in Full-color, and both great color and white brightness, there’s a strong sharpness to the 2045’s images that makes it stand over others as a great home theater projector. 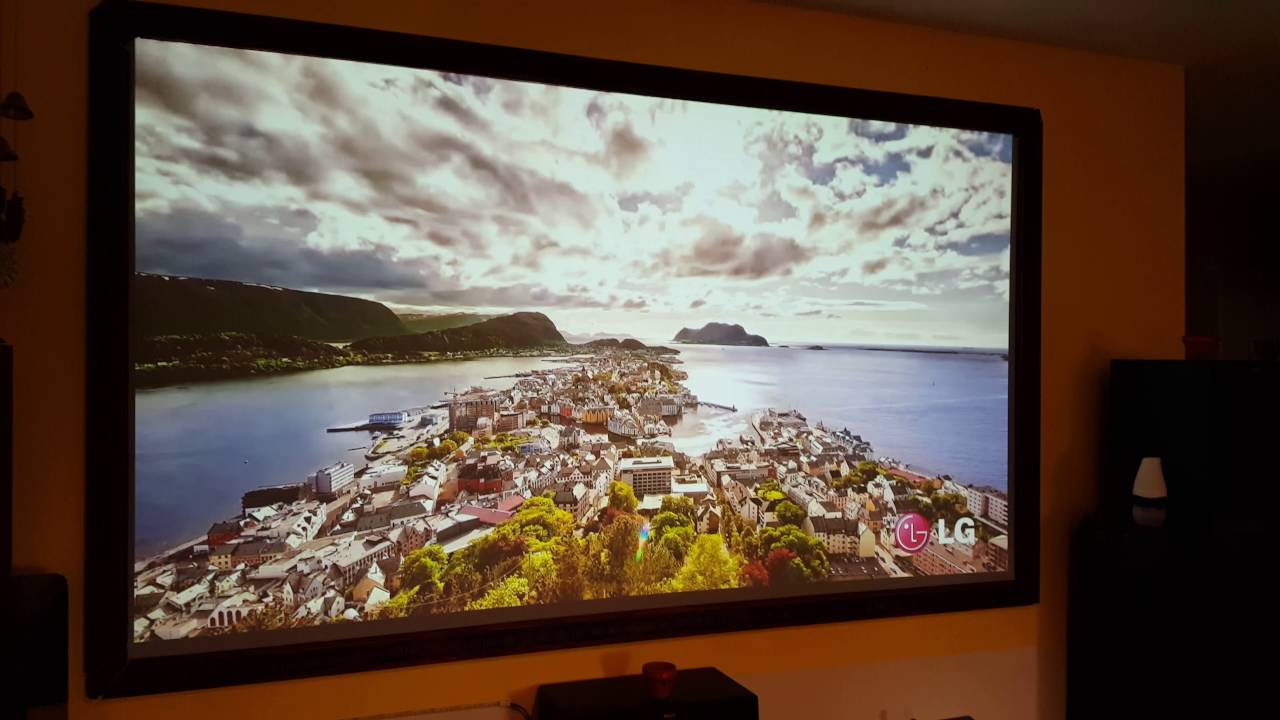 The Epson 2045 does have some shortcomings - such as its sometimes blurry pictures and washed black levels. Some users report that lines in sports and other small details look blurry on the projector no matter what you do.

Black levels determine the darkness that a projector can reflect. Having bad black levels means that you can’t make out details in dark areas of the image. This is a brightness problem, not contrast as some assume. Contrast adjusts white level, and brightness black. Its contrast ratio is actually great with a whopping 35,000:1. This projector has great white levels and strong overall contrast, but it lacks in forming clear images in dark areas on the screen.

Some users say not to worry about the bad black levels at all, especially if you’re watching it in the dark, but it seems to be one of the 2045’s worst problems. Dark rooms make it all the better.

Here’s a user watching Star Wars in their dark room: 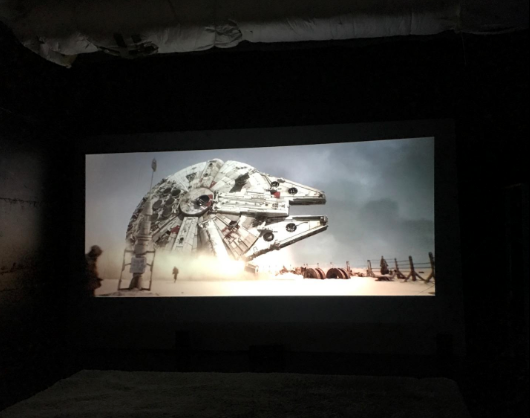 Other than those few things, the Epson 2045 has strong picture quality. Being 3LCD, one of its main feats is not having the rainbow effect like DLP projectors - though there have been few people who experienced the screen door effect putting lines across their screen and making it seem like they’re looking through a screen door. This is very rare and something not to worry about. If you have it, you’ll know immediately and can replace your projector. Don’t go looking for it.

The Epson 2045 has really good qualities. One of its main features people look for in home theater projectors nowadays is 3D. The 2045 projects it beautifully. In Full HD, the 2045 projects both amazing 2D and 3D images. Though you have to spend around $80 for Epson’s RF 3D glasses to thoroughly enjoy it, the 2045’s 3D is well-admired.

Though it doesn’t have 4K qualities, like some other 4k projectors but you can stream 4K from your laptop or other devices as this user does in his video here:

As you can see, even 4K is beautiful and enticing on this projector.

The Epson 2045 projects naturally in 16:9, the most common widescreen aspect ratio, but can also be resized to 16:10, a more widescreen image, and 4:3, the traditional TV and computer monitors use. With its widescreen formats, its many colors, and great brightness, the 2045 is able to project THX-like images that engross us into whatever we’re watching or playing. This feature is well-loved, especially by people trying to create their own home theaters.

With so many great features and the ability to bring great movies and games to your screen in Full HD 2D and 3D, the Epson 2045 stands as a great home theater projector that shouldn’t be ignored. Projecting up to 332 inches with high brightness and a large assortment of color through wireless streaming and two HDMI ports, there is a lot to like about the Epson 2045 and its overall great picture quality.

Though it has washed black levels and can be blurry, this portable projector is great for its value and amazing in dark rooms and outside. Both gamers and regular projector users will admire this projector. Soon enough, maybe you will too.

Lastly, if you had any doubts, here’s a video review of the Epson 2045 covering why it’s a good choice for you: