In the world of audio, there are some intangible things. Some stuff you’re not even aware you need.

One of those things is a DAC, or a digital-to-analog converter. It’s one of those components that allows the magic to happen right in front of you, by transforming digital data into analog signal. So, when you’re listening to any digital track, you’re in fact listening to its analog output, made possible by a DAC.

And like with all things tech-related, there are some good and not so good DACs, and those that are and aren’t right for you.

We’re here to help you. Read on, and expand your knowledge about DACs.

What Is a DAC?

First, we need to determine what DACs are in the first place. The answer is pretty simple, and it is hidden within the name.

DAC stands for Digital-to-Analog-Converter. And that’s precisely what it does!

It converts digital into an audio signal. In turn, your speakers or headphones will be able to reproduce sound.

However, there was a time when they were quite rare and only found in audio-enthusiasts’ setups.

The increased need for better DACs came about due to the overall dissatisfaction with the audio playback quality that most devices (be it computers or smartphones) had to offer. 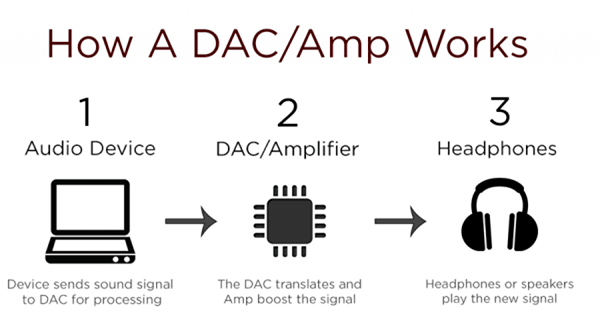 Essentially, by plugging in an external quality DAC, you ensure that the average audio chipset of the device is avoided, and replaced with some high-grade hardware.

How do these things actually work? Let’s make it clear that any device that can reproduce audio has an already built-in converter inside itself. It’s just a matter of how good that converter is.

Such chips are usually positioned on the devices’ motherboard, and in most cases, their quality depends on the quality of the motherboard itself.

So, whether you have a built-in DAC or an external one, its primary purpose would be to transfer digital signals into analog ones.

In most cases, the built-in ones will be ok, and nothing more than that. Once you get a quality, high-level DAC, you’ll see all the difference it makes.

Why Should You Get a DAC?

The main question before getting a DAC is - why should you really get one? Is that something you absolutely need?

Like we’ve mentioned above, you don’t necessarily need it. However, sometimes your computer or your smartphone won’t be able to produce sound without outputting some noise. Or it might be incapable of audio output if your files have a higher bitrate.

The only other reason why you could consider getting a DAC is if you’re professionally recording audio. And that’s pretty much it.

DACs and Improvement in Audio Quality

The main question that might arise when getting a DAC is does it really make your audio sound better? And that’s a pretty legit question since that’s the only reason why you might consider getting one in the first place.

Although you might believe that converting digital to analog won’t have much effect on sound quality, in reality, it does. Since such conversion can be a little delicate, there’s always some room for errors or glitches in the sound, even the slightest ones.

And then the sound will definitely not be something you wanted it to be.

That’s where a good, external DAC comes to rescue to remedy the situation. It is there to preserve the original sound and music, to the highest possible extent.

Now, there are portable desktop versions of DACs. This means that you don’t necessarily have to be sitting at your computer to get the full benefits of a DAC.

Instead, you can opt to bring one around with you in your pocket. In such capacity, a portable DAC will serve as a connection between your smartphone on one end, and your headphones on the other.

And you get your sound elevated just like that.

Sometimes you’ll even have the option to connect via Bluetooth, which is a feature more and more present in newer models.

And you don’t have to spend an arm and a leg to get one, since it’s possible to find an affordable portable DAC.

On the other hand, if you choose to go with a desktop model, know that you’ll probably get more input options and additional features.

Then again, since they are bulkier, you won’t be able to carry them around with you. And considering their size and features, they tend to be a bit pricier, which will be a huge factor in your decision process. 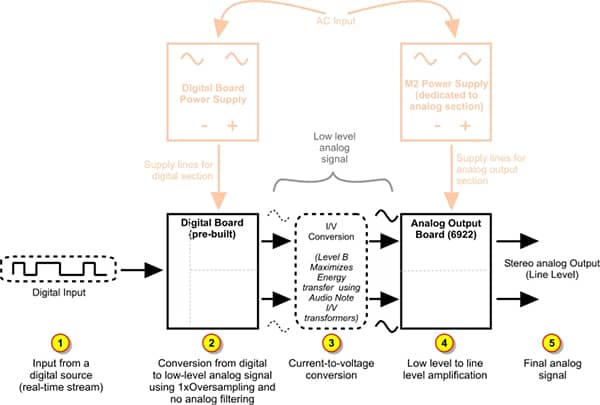 There’s one slight drawback when it comes to dedicated DACs, and that is they usually can’t power your headphones or speakers all on their own.

For that, they need help from an amplifier which will lift up the signal and enhance it so that it can go through your audio equipment.

That’s why many DAC manufacturers decide to offer and include an amp in their packages. For example, you’ll notice that your DAC has a headphone amp by the fact that it houses a headphone jack on it.

In fact, you’ll almost certainly find a headphone amp on your DAC, but you can always hook up a new, external one.

Back in the day, you needed a wired connection to hook up a DAC, but not anymore. Manufacturers made sure this became a thing of the past.

Like we’ve mentioned above, most of the newer models offer Bluetooth connectivity, but many models go beyond that.

Now you can connect your DAC via Wi-Fi, and choose it as a dedicated output device in many of your streaming services of choice. And to make things even better, hooking it up to Wi-Fi is like a walk in the park.

People call such DACs music streamers, and besides allowing you to connect wirelessly and stream, they can also offer amplification, for example. Bear in mind that they do come at a higher price than regular DACs.

Then again, the price difference is not so steep for you not to consider getting one.

Like we’ve discussed above, a DAC is not something you absolutely need to get. Then again, you might want to consider getting it, if you want to enhance your audio, and play your music as close to the original as possible.