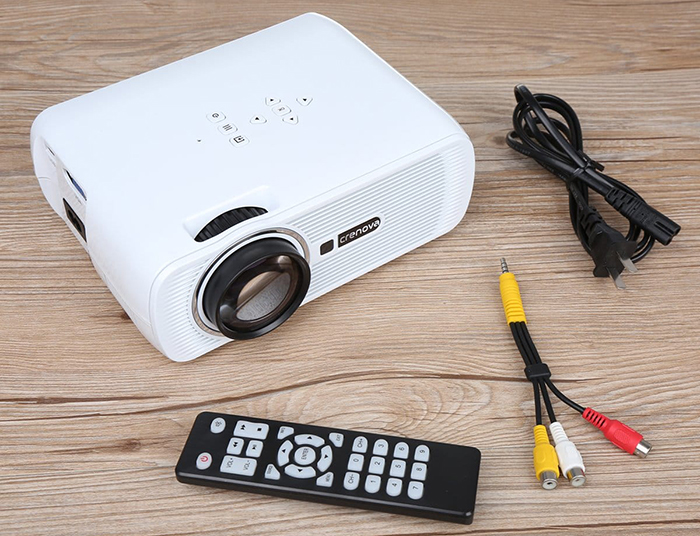 Not too long ago, movie buffs and aficionados were the rare ones who were buying projectors to enhance and emulate their movie theater experience. And for a good reason, since projectors were the only device that could offer them a screen big enough, to make them feel like they’re in the theater.

However, projectors are not only meant to serve as a home theater aid. They’ve found its place in many different settings, like schools, business presentations, or gamer setups.

But, not everyone was or is prepared to pay an arm and a leg for a projector. Some people just want to find something that can provide a certain quality, but it’s affordable at the same time.

That’s where the Crenova XPE460 steps in. It comes at such a low price that it will make you wonder if there’s some catch that goes with it.

In this review, we’ll lay out all the XPE460’s specifications, features, upsides and downsides.

We’ll take a closer look at it and see if it can bring something new and useful to the table.

By the end of this article, hopefully, you’ll know more about this model, and if it’s the right choice for your home setup.

Let’s be honest, design and layout play a vital part in the decision whether you’ll buy some piece of equipment or not. Even if some model works splendidly, if it looks ugly, many customers won’t even consider getting it. 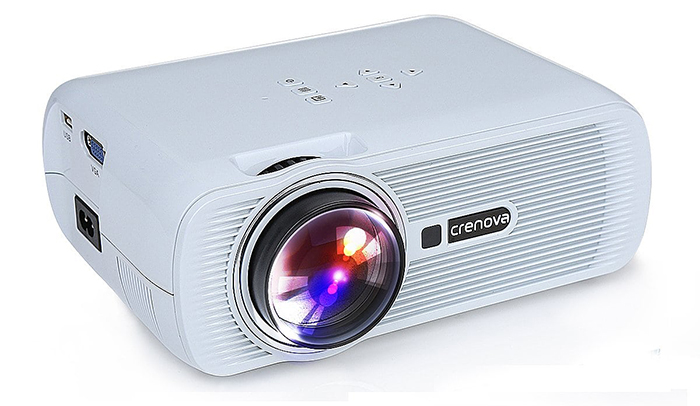 Luckily, the Crenova XPE460 can stand its ground in this department. Granted, it is not the most beautiful model out there, but also it’s not an eyesore.

Taking a quick look at it, it kind of has that “classic” vibe. Maybe like it was built a decade or two before.

But that doesn’t have to be a bad thing. By looking like that, it conveys the message of sturdiness and durability. Kind of like the devices used to be back then.

However, unlike the real old models, this one isn’t so heavy. It comes lightweight.

Measuring at 12.4, 4.2 and 7.5 inches, while weighing about 2.8 lbs, this projector is compact and light enough for you to be able to carry it around wherever you please.

So, what does the Crenova XPE460 bring performance-wise? More or less than what you would expect from such a low-cost model?

Not all projectors have the ability to project a large image from close proximity. ​Then again, the Crenova XPE460 has a short-throw ability.

This means that you won’t have to go far away from the projection screen to get a decent picture. So, if you wanted to get a 60-inch screen size, you would have to position the projector 6 feet from the screen. Which isn’t too much, you’ll have to admit?

Seeing that the throw distance is anywhere from 4 to 12 feet, you probably won’t have any problem setting the projector in most rooms. 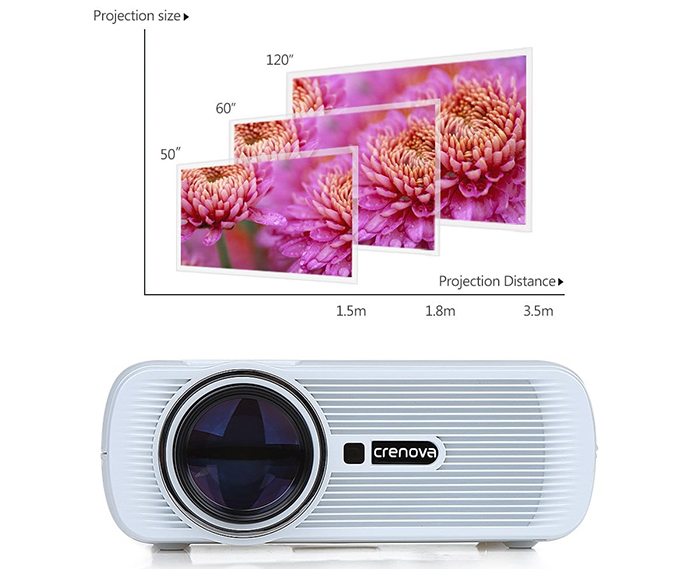 The screen size goes from 37 to 130 inches. And the image is watchable whichever size you choose.

Then again, like with everything in life, moderation is the key. It turns out that the best image output is somewhere in the middle.

Going anywhere from 50 to 100 inches would be a safe bet, and you’ll get the best possible results. On the other hand, if you choose to go too big or too small, the image might fall out of focus at times.

One nice, and maybe an unexpected feature for such a low priced item, is the keystone correction ability. Without it, you wouldn’t be able to get the image dead straight, unless it was placed perfectly in the center of the screen.

Thus, keystone correction allows you to remedy that, and make the image as natural as possible. And this model lets you adjust the optics by 12 degrees.

As far as the resolution goes, the Crenova XPE460 comes with an 800 x 480 resolution. So, it’s not HD but also not a standard definition. With this model, you get something in between, a compromise if you will.

Some refer to it as extended definition, which was popular back in the day when HD was too pricey.

Seeing that it’s a wide screen resolution type, the image won’t feel or look stretched. You’ll be able to get decent results, whether you watch 1080p or 720p videos. In fact, you might be surprised how sharp the images look.

That being said, they won’t look as sharp as they would on an ​good HD projector. Nevertheless, any loss of details can be forgotten when you consider how much you’ve paid for this model.

The Crenova XPE460 comes equipped with 1200 ANSI lumens, which is a pretty decent number for such a small device. Many small projectors don’t come even near that number (which means they have to work in a completely dark environment). 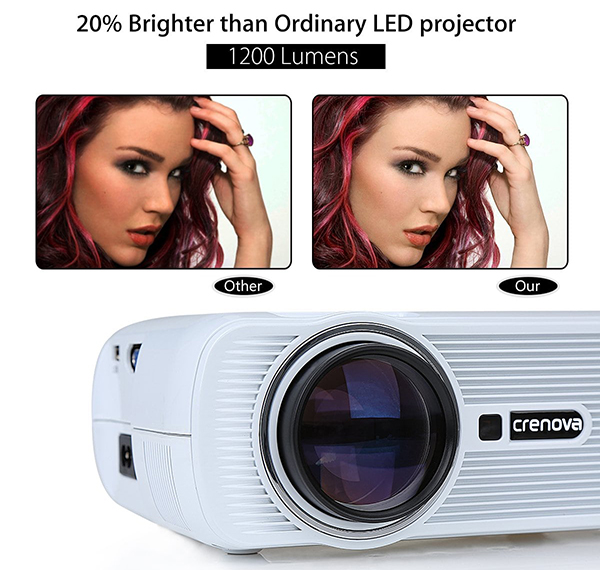 When it comes to this model, it can work with a dose of ambient light. In moderation, naturally.

However, to yield the best results, you might want to close the curtains and shut the lights off.

That’s the way to get the most out of your projector.

The colors will look rich and vivid, while the contrast and dark areas will feel deep and detailed. Then again, a bit of sunshine won’t ruin your movie-watching experience.

Unlike most other projectors, the Crenova XPE460 doesn’t come with a regular light bulb. Instead, it runs with an LED lamp. Now, you might be a fan of one or another, but an LED lamp should have a longer life. 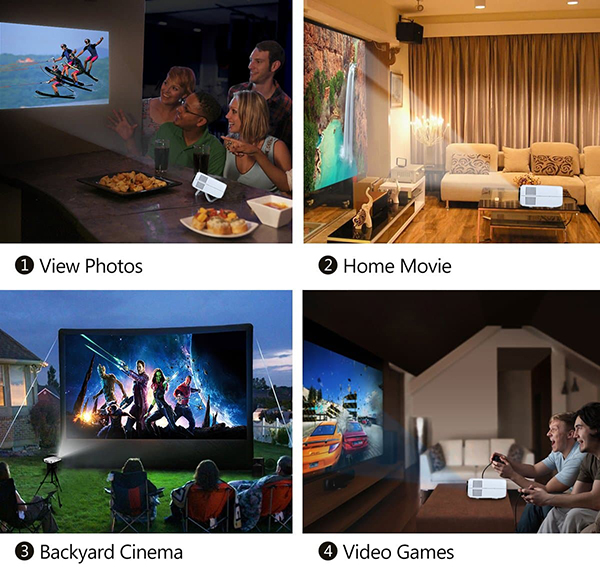 Also, many people claim that LED lamps tend to provide a clearer image and that they can output a larger screen when working at the same distance. Take a look at some of the benefits of LED lights.

One of the most important factors to consider when getting a projector is connectivity or connection options. Your experience and overall perception of the model will depend on what the projector has to offer in terms of connection ports.

However, nowadays, there are so many various devices and gadgets that you would be hard-pressed to find a projector that has the ability to accept all connections. So, your second best choice would be to find a model that can accommodate as many ports as possible.

Fortunately, the Crenova XP460 has a solid number of ports available. First of all, it has HDMI ports for wired connectivity. On the other hand, you can connect your smartphone using a wireless connection.

When you use HDMI, your device will be able to accept a FullHD signal, and then bring it down to the native resolution to allow you to view it. The same goes for VGA.

You can connect your computer to the VGA port, and it will reduce the pixels and make them comply with the native resolution. Therefore, the images will look much better.

Then again, for best results, you’d be better of by setting up the native resolution on your computer. Otherwise, you might run into occasional image distortion. 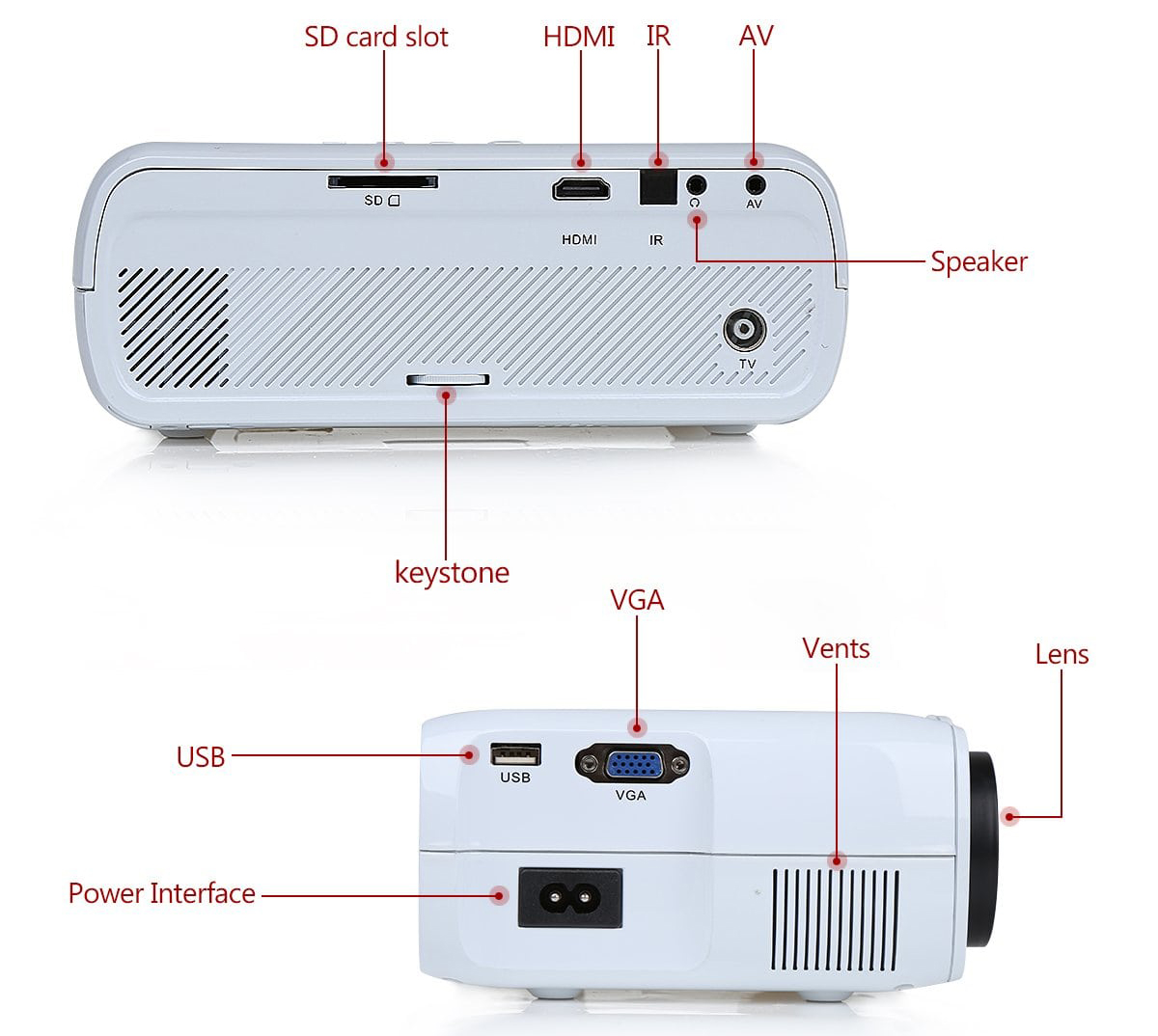 And last but not least, with Crenova XPE460, you can display video files by connecting a USB or an SD card (up to 64 Gb of storage). You can rest assured that there won’t be any glitches or disconnections.

You shouldn’t be too picky when you get a projector at this price. But, like with any other model, there are some downsides.

If you compare the Crenova XPE460 to other Pico projectors, you won’t see many drawbacks. But if you test it side by side with a larger model, you might find some flaws.

And the biggest one is that it’s not an HD projector. Sure, you can watch a movie just fine with this projector. Only, it would be much nicer to enjoy an HD experience.

​Well, I guess it’s either this or that. Either you save some money, or you get an HD picture.

Another feature that would be nice to have is a built-in battery, so you could use the device without the electricity outlet. However, you’ll have to spend a couple more bucks on adding it.

Don’t let the price fool you. The Crenova XPE460 has its perks. You might even be surprised by how well it works.

To be honest, it’s not the best projector out there, However, if you’re looking for value for money, then it just might be a good fit for you.

Especially if you don’t plan to splurge on a projector. XPE460 is a solid choice for those who are novice projectionists, who are short on money or just for those who want to get a backup projector.

Whichever it is, it’s safe to go with the Crenova XPE460 because it is a low-cost model. Just keep that in mind, so you don’t end up expecting too much from it.

Wow, this is a really nice-looking projector with the power and lumens to show outdoor movies with no problem. I’ve been looking for a projector for making presentations, but it never occurred to me that you could literally show outdoor movies at your house with a simple screen and a projector like this. I love the idea of getting outside more. So many of us work from home or spend all our time on a computer. What a refreshing change it would be to get out in the cool and enjoy a great movie with family and/or friends. This is the perfect time of year for it.