Some people are confused about the difference between a DVD and a Blu-ray disc. To some degree, this confusion is understandable since a Blu-ray disc and a DVD have the exact same shape and size and look exactly alike.

However, appearance is just about the only thing that these two storage mediums have in common.

Let’s take a look at a few of these and see if we can clear up some of the confusion.

The storage capacity on both DVDs and Blu-ray discs are measured in gigabytes. It’s the same measure that’s used on your iPod or on your computer.

Obviously, the more gigabytes of space a disc has, the more information it can hold.

A DVD single layer can hold approximately 4.7 GB of data. This equates to a two hour movie. You might hear people refer to these as DVDs – 5s.

If you have a double DVD, you’re able to store two times the data, or 8.7 GB. This means that a double DVD can store around four hours of a movie.

A single layer Blu-ray disc can store 25 GB of data. This is the equivalent of a two-hour high definition movie. If the information was stored in standard definition format, the disc would have space for 13 hours of information.

With a double layer Blu-ray disc, you can store 50 GB of information. We are talking about 4 and a half hours in high definition, or 26 hours in standard definition.

If you wanted to, you could put the first six Star Trek movies on a double layer Blu-ray disc.

Both DVDs and Blu-ray discs are going to use lasers to read the information that is stored on them. In both cases, the disc is going to spin and the laser is able to take the encoded formation and use it to produce both image and sound on your projector or television.

With a DVD, a red laser at 650 NM wavelength is used to read the disc. This creates the sights and sounds you see on your device of choice.

While it might seem obvious after you read it, many people are surprised to learn that the name Blu-ray has to do with the color of the laser that is used to read the stored information on the disc.

The wavelengths of a blue laser are shorter than those of the red lasers used in a DVD player. Blu-ray lasers are at 405 NM and are approximately two and a half times smaller in diameter than a red laser.

This makes it possible for the Blu-ray player to read the information on the disc with more precision.

Blu-ray discs and a DVDs are physically the same. Both forms of media have grooves in their bottom layer.

This makes it possible for the laser to penetrate through and read the information that is stored on the disc.

Since a DVD is read using a red laser and since a red laser has a larger diameter, the grooves on the disc need to be large enough to accommodate this larger wavelength.

Since the grooves need to be far apart, there’s only enough space for 4.7 GB of information. On a DVD, you’ll also see a protective layer that’s made to resist scratching. 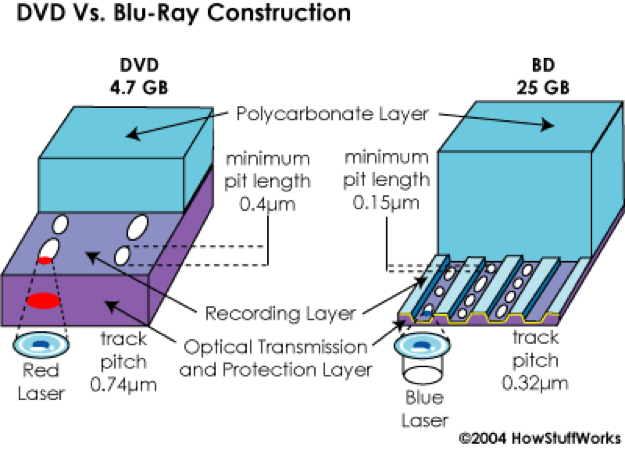 The grooves in a Blu-ray disc are going to be a lot thinner. They are going to sit a lot closer together. This is because the blue laser has a lot shorter wavelength than the red laser used in DVDs.

This is the reason why the Blu-ray disc is able to hold a lot more information than a DVD, even though the disc is the exact same size.

Just like a DVD, a Blu-ray disc also has a protective layer to prevent scratches. The layer of protection is physically thinner than what you see on a DVD, but it has a harder coating and is more scratch resistance.

When you measure resolution, you take the number of vertical lines and multiply that by the number of horizontal lines of light in each picture.

Resolution is represented by the number of horizontal lines that travel across the screen. So there could be 480, 720, or 1080. The bigger the number, the greater the resolution and the more detail you’re going to see in the picture.

Most DVDs use a standard definition resolution at 480. Some of them have an enhanced resolution of up to 520.

A DVD will look amazing on your standard television. It makes use of all the available pixels on the screen.

However, if the image of a DVD is shown on widescreen HDTV, the picture may take on a grainy appearance.  A DVD is capable of storing high-definition data.

However, it can only do this for about 30 minutes of information.

A Blu-ray was designed to transmit images at 1080 display. As mentioned earlier, a Blu-ray can hold 25 GB of data. This means that with a single layer disc, you have enough space for a two hour HD movie.

Blu-ray has one of the best image resolutions available today and looks amazing on a high definition television.

DVD players do not have the capacity to play Blu-ray discs because the red laser of the DVD player is too large to fit into the smaller grooves of the Blu-ray disc.

Most Blu-ray discs have been designed to be backwards compatible and can play both Blu-rays and DVDs.

For most people, making the switch from VHS to DVD was a challenge. Now, switching from DVD to Blu-ray requires another upgrade in technology.

What form of media do you most commonly use for your movie viewing experience? What do you feel are the pros and cons of Blu-rays and DVDs? Let us know in the comments section below.