When it comes to sports projectors it’s all about throw distance and quality. Let me explain these two things in a little detail.

You want a projector that can project from a distance that won’t interfere with viewing. These are generally divided into short throw and long throw projectors.

Long throw projectors are what I recommend as they allow more people to watch without interfering.

Quality is another important consideration and when it comes to this, it’s all about Lumens and Contrast Ratios. These two factors will determine the quality of the picture.

To help you out I’ve made a list of 4 of my top projectors for sports. I’ve installed all of these units many times and I know they work well. The Optoma EH415ST Projector is geared towards visual presentations in classrooms and especially for sports as its 1080p display. The Optoma EH415ST’s display may be just as good as the 4k display of the Optoma 4k Projector, despite a significantly lower price point.

I choose the EH415 as my top pick because I’ve seen them in action and for the price, the video quality just can’t be beat. There are higher end models but you’re basically getting the same product as you would with the EH415.

Highly recommended for anyone who is serious about watching sports at home or for an install in a bar. Except long usage of the lamp as well with this which will save you a lot of money in the future.

As stated above, the Optoma EH415ST has an elegant display which is of the 1080p variant. This quality is further augmented by its high ANSI lumen rating of 3,500 lumens.

This means that insufficient ambient light will not negate the beautiful display that is being projected by the Optoma EH415ST. Said device can even be used outside like other outdoor projectors because of the high brightness rating.

Both the exquisite display and the clarity provided by its high brightness rating conspire to give an excellent viewing experience for its consumers. This display is also adequate to display the fast-paced action of sports.

The lamp inside the Optoma EH415ST is a bruiser. Said lamp is estimated to last for about 3,000 hours. That estimate is far superior than the average lamps found in competing models.

The best part is that, as stated in the specifications, the lamp’s estimated lifetime can be further boosted up to 7,000 hours if the eco mode is activated.

Buying the Optoma EH415ST means that you will be using said device for a long time and its lamp life is a testament to Optoma’s drive to create top-notch and durable products.

Presenting details in a sports setting will entail that the one presenting might use his/her hands to emphasize his/her points.

That is why Optoma saw fit to put some remote management functions to the Optoma EH415ST Projector.

The following are included in the Optoma’s Package:

The Optoma EH415ST has the ability to resume the operations of itself in the least amount of time. This is very useful when the presentation of data or the movie is paused for a few minutes.

Rather than wasting electricity and keeping the display, the Quick Resume functionality allows the users of this projector to temporarily turn off the display. The device will resume automatically once is is used again.

As stated above, the Optoma EH415ST has an excellent display. This, for the most part, attributable to the BrilliantColor Technology that is being used in this device.

The BrilliantColor Technology, alongside with the high lumen count, conspires to make an excellent display. This is also a great one that can double up as a projector tv. The Sony VPL-HW45ES is geared towards home theatre use. As such, the VPL-HW45ES is for consumers and users who will primarily use this device to view sports games in the safe confines of your home.

The Sony VPL-HW45ES is also a good investment if you juxtapose the cost of said device and the performance that it gives. In other words, the VPL-HW45ES is bang-for-the-buck. ​ 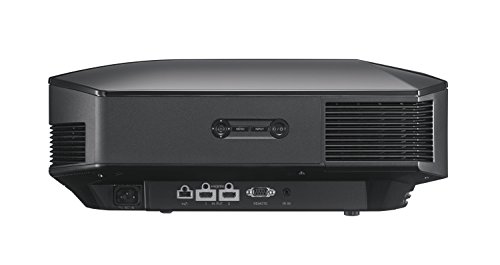 Poor black levels will make the image fuzzy and greyish which is a sign of a poor projector. Obviously, that situation is not present in the Sony VPL-HW45ES.

The Sony VPL-HW45ES is a big device when juxtaposed to other similar competitors. As such, this device is designed to be mounted. Caveats are abound if the projector is physically large. For one, the transportation of such device will be cumbersome.

Another problem may arise in positioning such device because one will surely make adjustments on the angle of which the projector will display the images. In the opposite, the Excelvan 100HM might be of interest for those who want absolute portability.

Still, the Sony VPL-HW45ES is still an excellent device for home theatre use. As stated above, the display quality is excellent.

So to is the brightness rating of the device which is rated at 1,800 lumens. The brightness is more than adequate in indoor theatre use although it most certainly is not an outdoor projector.

The Sony VPL-HW45ES’s brightness is evenly distributed across the display. This means that the occurrence where some areas of the screen are dark while some are relatively brighter will not occur in the Sony VPL-HW45ES.

This means that the viewing experience will not be marred by any inequalities in the distribution of the lumens.

The lamp life in this device is also quite excellent. The lamp included in the chassis of Sony VPL-HW45ES will last for an estimated 6,000 hours in eco-mode. The durability and longevity of the lamp inspires confidence on this product.

By making the lamp long lasting, Sony is clearly making a statement here wherein Sony products (like the Sony VPL-HW45ES) will surely last for a long time. As such, investing in this product is encouraged because of it purported longevity.

Reality Creation does this by looking at the many aspects of any given image, after which it chooses the best one out of the aspects and projects it.

Basically, Reality Creation is similar to the other display techniques that are usually called by other competitors as “Smart Displaying/Image”.

The related features available on other competing projectors also have such feature but they tend to over do it and the image will come out as “artificial”. The same is not attendant in the Sony VPL-HW45ES.

This feature allows the Sony VPL-HW45ES to project fast paced action with great precision. Lovers of sports will absolutely like this feature.

We also think this unit is a great choice if you're looking for the best home theater projector for your home.

The Sony VPL-HW45ES can also project images via the 3D mode. Sony has again succeeded in putting up an enjoyable 3D experience on one of their projectors. The brightness is on the lower side, which is prevalent on projectors with built-in 3D mode.

However, Sony VPL-HW45ES’s 3D mode is much more dimmer than the usual. This is most certainly intended by Sony to make sure that the black levels are still excellent even on 3D mode.

The Sony VPL-HW45ES is also a great gaming projector. The Sony VPL-HW45ES has the Input Lag Reduction feature built-in. This feature allows the lag to be toned down to 24 ms. 24 ms is very much a good rating for gamers although the Optoma GT1080Darbee is bit better.

Said feature will reduce the lag between the computer and the projector. Gamers who want their gaming exploits projected on a bigger screen will most definitely love this feature.

Creative Frame Interpolation basically smoothens out the frames that are being projected into the screen. This is more observable when viewing sports games.

Sports is full of fast-paced action that ordinary projectors might have some difficulty in catching up with said action. Creative Frame Interpolation allows projector, like the Sony VPL-HW45ES, to catch-up with the fast-paced action and smoothen the frames so that the viewing experience will be excellent.

Creative Frame Interpolation is also useful when watching Music Concerts. Said feature endows the frames an effect that is called the “soap opera effect”. The addition of such effect greatly enhances the viewing experience.

The Sony VPL-HW45ES will surely deliver regardless of the reason for using the Creative Frame Interpolation. Epson has incrementally improved their line-ups throughout the years. However, the introduction of the Epson Home Cinema 5040UB 4K (as well as the Pro Cinema 6040UB) breaks the tradition because said projector is much more advanced than its predecessor.

The leap in terms of specs and quality is unprecedented in Epson’s history in the field of projectors. Read on to know more about the Epson Home Cinema 5040UB 4K, as well as its attendant pros and cons.

The centerpiece of the functions that is available in the Epson Home Cinema 5040UB 4K is the 4K enhancement. Projectors with 4K enhancement must not be confused with true 4K projectors.

Projectors with 4k enhancement are still using 1080p processors but with added quality of the display.

With that being said, the display of the Epson Home Cinema 5040UB 4K is clearly superior with normal 1080p displays or even with 2K ones. The added clarity of the 4K enhancement greatly increases the quality of its display.

The colors are projected better and has is vibrant. The caveat to this is that most 4K projectors (or at least the ones with 4K enhancements) tend to display dark images.

The Epson Home Cinema 5040UB 4K also has Creative Frame Interpolation or CFI. CFI smoothens the actions that may be projected on the screen.

Sports lovers would benefit from this feature because the CFI feature will allow this device to cope with the fast paced action that is prevalent in sports.

The Epson Home Cinema 5040UB 4K also has an incredibly low input lag of 30 ms. This means that the device can also cope with the fast action of games.

One can project his/her gaming exploits in the large screen without fear of any sufficient lag in the projection. However the Epson Home Cinema 5040UB 4K. Is still not as good as the Optoma G1080 in regards with input lag, although the distance between the two is not that great.

The Epson VS240 may not blow away in the spec sheet but it is more than enough when you factor in its value and its capabilities . For starters, the Epson VS240 has an incredibly bright display.

For those who just want casual viewing of movies or sports games, the Epson VS240 may suit you.

The Epson VS240 is characterized with a display that is life-like even if the brightness is cranked up to the highest degree.

Even if dynamic mode is activated, the Epson VS240 avoids the problems of other projectors wherein the color green dominates the screen. The same is not attendant in the Epson VS240.

Longevity of the Lamp

Testament to Epson’s zeal to provide durability to its devices is its decision to endow the Epson VS240 with a lamp that lasts for a very long time. The lamp inside this device will last for an estimated 5,000 hours.

That’s considered long with regards to competitors. However, Epson was not satisfied, as the eco-mode included can extend the lamp life up to 10,000 hours.