There was a time when a “decent” projector would cost you an arm and a leg, while also taking up half of your room. Nowadays, with consumer electronics getting way better and way cheaper, you can get a really respectable model, on a budget.

And, calling them budget doesn’t have to mean you’ll get some under-powered, no extra features model.

BenQ W1070 is one of those projectors. It comes with 3D capability, built-in speakers and a size that makes it easy to pack and carry with you everywhere.

And with color accuracy, and contrast and black level, this model wipes out most of its competition.

While it does come with its set of drawbacks, it would be hard to find a big-screen projector that offers this much for such a price tag.

Then again, it all depends on what you’re looking for.

We’ve compiled an in-depth review of the BenQ W1070. Take a look at it, and learn more about its good and bad sides, and see if it is something you might be interested in.

Although many modern projectors embrace the modern, sleek, almost futuristic design, the people at BenQ went the other way with W1070. Which, if you think about it, doesn’t have to be bad at all.

This model has a slight “business presentation” vibe to it. I most cases, people are interested in what the projector has to offer feature and performance-wise.

So, the design shouldn’t be an issue at all.

With its size of 4.1 inches height, 12.3 inches width and 9.6 inches depth, it’s small and compact enough for you to be able to carry it in your bag or purse.

You can find the usual control buttons placed on the right of the device, and a slider cover on the left (behind manual zoom and focus lens controls). When you open that slider, you’ll see that there’s a screw in there.

This screw allows you to adjust the vertical lens shift. This part can get a bit tricky since you’ll need a screwdriver to perform this task. When to use lens shift and when keystone correction? Learn more from this guide.

And since the vertical lens shift is quite sensitive here, it’s tough to get it right at first.

So you could look at it from two perspectives. Having to adjust the lens shift that way is annoying and troublesome, but at least you have some type of control available.

One thing that could also be better when considering design options is the exhaust grill placement. The front-facing exhaust grill allows for some occasional lamp leakage, so it would be more helpful if the grill would face away from the screen. 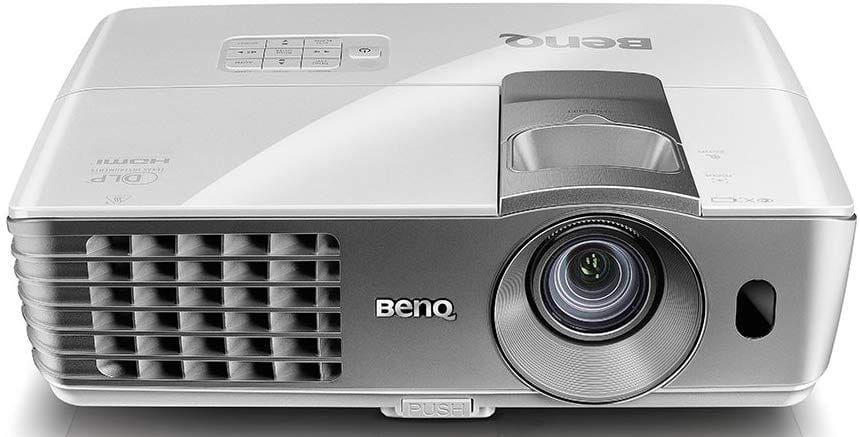 With more than remarkable color accuracy and rich contrast, the W1070 is a great home entertainment projector. A perfect fit for a living room movie oasis.

All things considered, the displayed image boasts brightness and clarity. It remains naturally sharp and detailed, mostly due to its FullHD resolution.

The manufacturer states that the brightness is rated at 2000 ANSI lumens. And it does measure that, but only when you shift to Dynamic mode and turn up the brightness and contrast.

When you go with the default settings, the Dynamic mode has around 1500 lumens at maximum capacity. This mode is a good choice when you want to utilize every lumen available, and the contrast and colors don’t concern you that much.

And when you use W1070 in ambient light, the colors and contrast will get muffled from time to time. So, even though this model can be used with the presence of ambient light, it performs best in a darker room.

The other two modes available are Standard and Cinema.

Standard mode is rated at about 1270 lumens and is perfectly balanced for a living room setting. The brightness remains, but it adds a bit of potency by having more blue in the grayscale, which in turn gives you a 7000K color temperature. Making Standard mode perfectly suitable for any general use (like movie watching). 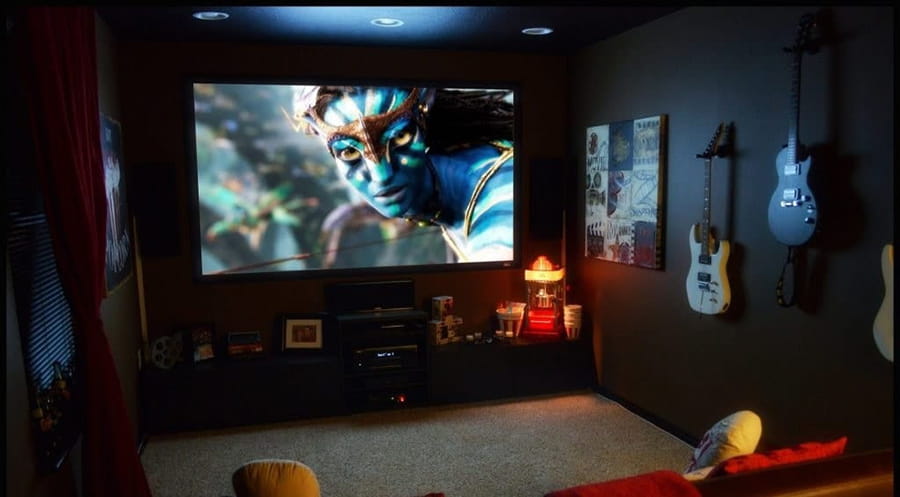 In terms of brightness and color temperature, Cinema mode isn’t all that much different from Standard. It is rated at about 1220 lumens and 6800K temperature. In a dark environment, such brightness may even be too much for you.

In such cases, Eco mode could lower the brightness by about 30% and reducing the lumen output at around 900.

The W1070 also comes with a SmartEco feature. In theory, this mode works well and with just a push of a button, it should reduce the brightness output.

In reality, understanding and utilizing SmartEco mode can be confusing and complicated. You won’t be able just to select this mode from a list.

You will need to use the content, which will, in turn, compel the projector to change the settings to Smart Eco. Which could have been much easier by just allowing you to choose the level of lamp power by yourself.

As far as the black level goes, the W1070 does a good job, at least as far as the home projectors are concerned. That being said, when compared to other home theater projectors in the same price range, you can see that it could do better.

That doesn’t necessarily mean that the contrast depth and richness are not right. It’s just the fact that the black level and contrast ratio weren’t the main focus.

The shadow depth and separation remain excellent, even when you add a touch of ambient light.

Gamma is quite accurate. You can utilize it and spruce up the image when it becomes weaker in the ambient light.

Simple and Easy to Use Calibration Controls

The color output is remarkable with this model. It features user-friendly calibration controls.

Those controls allow you to adjust the gamut and grayscale easily. Also, there’s an ISF mode available.

But more importantly, the projector comes with adequately saturated and vibrant colors from the get-go. Which, you have to admit is probably more important than having calibration controls, since most users won’t try to utilize them in the first place.

The default settings on all modes are more than enough for specific situations. The Dynamic mode could be used when dealing with ambient light.

Standard mode is suitable for watching movies or videos when there’s some amount of ambient light. Cinema mode is best used when trying to watch a movie in a dark setting.

When it comes to sharpness and clarity, that’s where W1070 shines. It has a fantastic natural sharpness, even when you lower the sharpness controls.

All the details are displayed with such intense results and all that without any detail enhancement options.

In most cases, 3D projectors do not shine when it comes to input lag, even in those cases when you are not using the 3D mode. But, the W1070 provides some pretty decent numbers in this department.

It comes with an input lag of around 24ms. This won’t make it a competitive gamers’ choice, but you could play some serious games on it.

To get set the projection image correctly on the screen, you will need some sort of height adjustment. Fortunately, BenQ W1070 has both front and back adjustment options, allowing you to fix the level issues when you mount it on the table or a shelf.

This model also includes a vertical lens shift. By having this option, you can add a little flexibility to the height of the projector without ever using keystone correction.

However, it has its own limitations. Like we’ve mentioned, it is somewhat tricky to use since you’ll need a screwdriver to turn the knob, and you can adjust the lens only by a few inches.

All in all, you’ll be able to shift the image only by ten or so percent of the image height. That way, the bottom of the image will be level with the lens center.

Thus, mounting the projector to a table or a ceiling should be the best way to go, while going with a shelf placement would be a more unfortunate decision.

With a 1.3:1 zoom lens ratio, this model can project a 100” image from a distance at about 8 to 11 feet. Which is expected from a projector like this one.

The manufacturers claim that you can even get a 235-inch display image from W1070. But you’ll need a hangar to be able to do that!

One of the reasons why you’ll feel compelled to get a projector is to use it instead of a TV. And for such a substitute, you’ll need to have some kind of audio capability.

Now, projectors (especially within this price range) aren’t so well known for their audio qualities. The W1070 also doesn’t offer that much in this area.

Unlike some of the competitors, it doesn’t offer stereo sound. Instead, it comes packed with a 10W mono speaker, which in all honesty, doesn’t provide that much. Learn more about the differences between mono and stereo sound.

On the other hand, it doesn’t distort the sound the way that some other small speakers tend to do. So, the speaker can be perfectly adequate if you’re going to use it in a medium to large living room.

Connectivity options are as straightforward as they get. And they will do the job for you in most cases, probably.

There are two HDMI ports, S-Video, component, and composite. If you do not wish to use built-in speakers (which you probably won’t), there are audio in and audio out to hook up your external speakers.

Most likely, you’ll be blown away by the 3D output this projector provides. Especially when you take its price into consideration.

You’d be hard-pressed to find a model that would give you so much depth at this price range.

This is one of the few models that feature FullHD 3D. And for displaying that 3D image, it uses the DLP Link system.

Basically, this means that the DLP chip inside the projector sends a light signal (between each frame) to the 3D glasses and synchronizes the image.

The good thing about using a DLP Link system is that it has low levels of crosstalk, or no crosstalk at all, to be precise.

However, synchronization can be an issue with the DLP Link system. It gets lost more easily than with other types of glasses, especially if people tend to move around quite often.

Another valuable performance feature is the long lamp life. With 3,500 hours in normal mode and 6,000 in Eco or Smart Eco mode, this model has a significantly longer lamp life than most of the competing models.

It has such a long lamp life mainly due to the fact that the SmartEco mode can drastically dim the lamp (by about 70%), to make it work well with the content at hand. Which can be useful, even if you can’t select the brightness levels yourself.

Once you get past some of its limitations, you’ll see that the BenQ W1070 is quite a decent model and that it will probably surpass your expectations. Of course, when we talk about that particular price range.

It is an excellent value for money, that will work well for both a home theater setup and for occasional use. With its detailed and colorful images that do well, even with ambient light, this entry-level projector is undoubtedly a bargain.